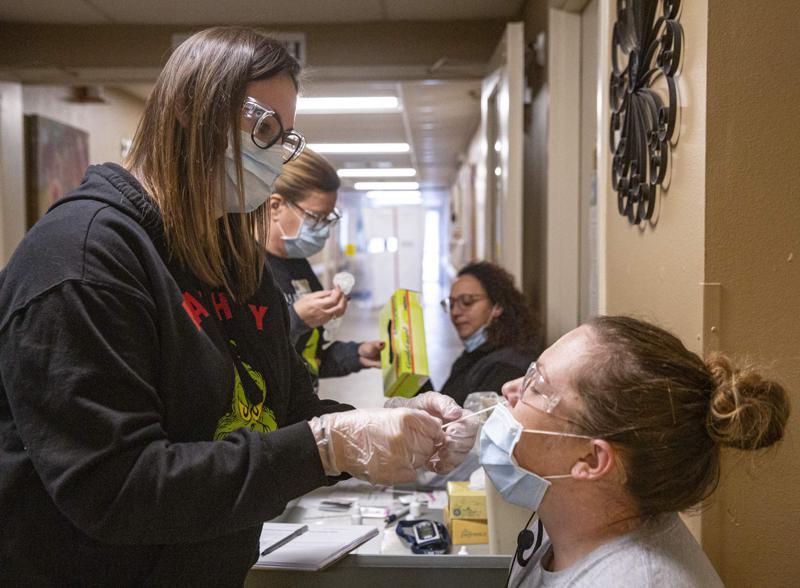 One hundred Iowans died this past week of COVID-19, the most deaths confirmed in a one-week period since April, though the number of new COVID-19 cases has decreased for the fourth consecutive week.

Fifteen of the deaths came in Linn County, the most of any Iowa county. To date, 394 people have died of the virus in Linn County. Statewide, the death toll since March 2020 totals 6,848.

Most of the past week’s deaths were people age 61 and older:

The deaths, as confirmed by the Iowa Department of Public Health, came in September or October, when Iowa was experiencing the latest surge of coronavirus cases due to the delta variant.

State public health officials reported 6,907 new COVID-19 cases in the past week, compared to 8,167 cases the week before.

The seven-day positivity rate was 8 percent compared to 8.7 percent the previous week.

Those aged 17 and younger age group continued to hold the top share for positive COVID-19 tests over the past week at 22 percent, the same as last wee.

Linn County reported 514 new cases in the past week, compared to the 545 reported the previous week. The seven-day positivity rate was 8.7 percent, up from 8.4 percent last week.

Johnson County added 188 new cases in the past week, about the same as the 187 new cases reported last week. The seven-day positivity rate was 5.6 percent, up from last week’s 4.9 percent.

Though case counts are dropping statewide, transmission of the coronavirus remains at the highest level, according to federal officials. A map from the Centers for Disease Control and Prevention shows 98 Iowa counties continue to have the highest rate of community transmission, with only Sioux County in northwest Iowa showing a substantial rate of transmission.

In the past week, an additional 10,079 Iowans became fully vaccinated against COVID-19, bringing the statewide total to 1,647,263.

That accounts for 61.55 percent of Iowans aged 12 and older and 52.21 percent of the state’s entire population.

Johnson County reported 94,649 residents are fully vaccinated as of this week, up 477 in the past week. That’s 62.62 percent of the county’s total population and 76.14 percent of those aged 16 and older.

As of Wednesday, 557 patients were hospitalized with COVID-19, compared to 598 reported the week before.

The number of patients in intensive care units was 142, compared to last week’s 150. Those on ventilators dipped to 67, compared to 78 last week.

Those not fully vaccinated against COVID-19 account for 77.2 percent of COVID-19 hospitalizations and 79.6 percent of the COVID-19 patients in intensive care units, according to state data.

The number of long-term care facilities reporting an outbreak this week decreased to 25, compared to 29 reported last week. The outbreaks reported at 31 facilities the previous week was the most since February.

An outbreak is defined as three or more COVID-19 cases among staff and residents.

John McGlothlen of The Gazette contributed to this report.