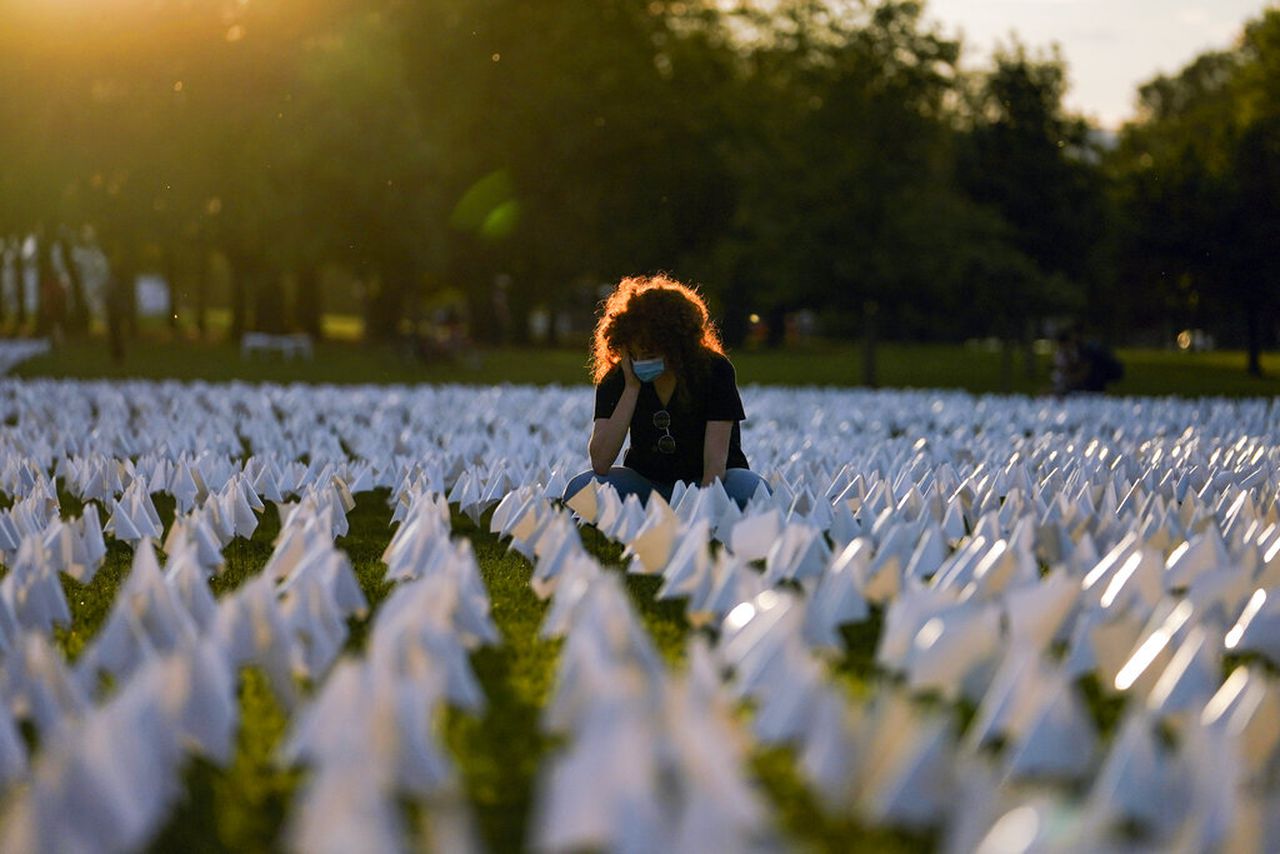 BERGAMO, Italy — The Italian city that suffered the brunt of COVID-19′s first deadly wave is dedicating a vivid memorial to the pandemic dead: A grove of trees, creating oxygen in a park opposite the hospital where so many died, unable to breathe.

Bergamo, in northern Italy, is among the many communities around the globe dedicating memorials to commemorate lives lost in a pandemic that is nearing the terrible threshold of 5 million confirmed dead.

Some have been drawn from artist’s ideas or civic group proposals, but others are spontaneous displays of grief and frustration. Everywhere, the task of creating collective memorials is fraught, with the pandemic far from vanquished and new dead still being mourned.

Memorial flags, hearts, ribbons: These simple objects have stood in for virus victims, representing lost lives in eye-catching memorials from London to Washington D.C., and Brazil to South Africa.

The collective impact of white flags covering 20 acres on the National Mall in the U.S. capital was literally breathtaking, representing the more than 740,000 Americans killed by COVID-19, the highest official national death toll in the world.

One honored 80-year-old Carey Alexander Washington of South Carolina, who was vaccinated and contracted the virus while still working as a clinical psychologist in March. His 6-year-old granddaughter Izzy collapsed in grief when she found her ‘’papa’s” flag — a moment captured by a photographer and shared on Twitter.

“Families like mine, we’re still grieving,” said Washington’s daughter, Tanya, who traveled from Atlanta to see the memorial. “It was important to witness that honor that was being given to them. It gave a voice to all our loved ones that have been lost.”

A memorial wall in London similarly conveys the scale of loss, with pink and red hearts painted by bereaved loved ones on a wall along the River Thames. Walking the memorial’s length without pausing to read names and inscriptions takes a full nine minutes. The hearts represent the over 140,000 coronavirus deaths in Britain, Europe’s second-highest toll after Russia; like elsewhere in the world, the actual number is estimated to be much higher:160,000.

“It shocks people,’’ said Fran Hall, a spokeswoman for the COVID-19 Bereaved Families for Justice. She lost her husband, Steve Mead, in September 2020, the day before his 66th birthday. “Every time we are here, people stop and talk to us, and quite often they are moved to tears as they are walking by, and thank us.”

In Brazil’s capital, relatives of COVID-19 victims planted thousands of white flags in front of Brazil’s Congress in a one-day, emotion-laden action meant to raise awareness of Brazil’s toll of more than 600,000, the second-highest in the world.

And in South Africa, blue and white ribbons are tied to a fence at the St. James Presbyterian Church in Bedford Gardens, east of Johannesburg, to remember the country’s 89,000 dead: each blue ribbon counting for 10 lives, white for one.

How victims of war, atrocities and even health crises are remembered has evolved through the ages. Victorious statues of generals gave way to tombs of the unknown soldier after World War I, in a bid to remember the sacrifices of ordinary soldiers. Paris’ Arche de Triomphe was one of the first.

“World War I was a benchmark, which is particularly relevant because it was followed by the 1918 flu pandemic,” said Jennifer Allen, an assistant professor of history at Yale University who has studied memorial culture.

That pandemic seems to have been little memorialized, partly because of the keen focus on the war dead. “It was a period of mass death,” Allen said. “That is why we talk about the lost generation.”

Holocaust memorials were the next major testaments to mass killing, Allen said. They span big, traditional monuments like Berlin’s Holocaust Memorial, and more personalized tributes where victims are named, like the so-called Stumbling Stones outside buildings were Jews lived before the Holocaust.

Not since the AIDS quilt made its way across the United States, with loved ones adding squares for people who had succumbed, has a health crisis been the object of memorials of a scale like those now honoring the COVID-19 dead. The quilt has grown to nearly 50,000 squares, representing more than 105,000 individuals.

Memorials like the AIDS quilt and the Stumbling Stones have helped solidify a trend toward grass-roots remembrances and the desire to honor victims as individuals, Allen said. Both are emerging in the COVID-19 memorials.

“We want to get to the individuals, who make up all of the millions of deaths,’’ Allen said. “As people so often point out: These were mothers, fathers, brothers, sisters, children, neighbors. “

Collectively memorializing the coronavirus dead has been complicated by the weight of private grief, which was too often borne alone in the first wave, when funerals could not take place and loved ones too often died without the presence or caress of a loved one.

An Italian Facebook group, Noi Denunceremo, was started as a place to publicly, if virtually, remember the dead during the country’s first draconian lockdown, and developed quickly into a collection of data on alleged failures that have been turned over to prosecutors.

In India, one of the world’s most affected countries, an online memorial was launched in February, www.nationalcovidmemorial.in, inviting submissions verified with death certificates. So far, it has only 250 tributes, a minute fraction of the over 457,000 confirmed dead, which is itself a vast undercount.

“It’s not memorializing only, it’s how we can pay respect and dignity” to the dead, said Abhijit Chowdhury of the COVID Care Network that started the memorial from the eastern city of Kolkata.

In Russia’s second-largest city, St. Petersburg, a bronze statue called “Sad Angel” was placed in March outside a medical school to honor the dozens of doctors and medical workers who died of COVID-19. The sculpture of an angel with his shoulders slumped and head hanging disconsolately is especially poignant because its creator, Roman Shustrov, himself died of the virus in May 2020.

Italy has not dedicated a national monument to its some 132,000 confirmed dead, but it has designated a coronavirus remembrance day. Premier Mario Draghi stood among the first newly planted trees in Bergamo’s Trucca Park on March 18, the first anniversary of the indelible image of army trucks bringing dead to other cities for cremation after the city’s morgue was overwhelmed.

Bergamo’s mayor said the city considered proposals for statues or plaques bearing the names of the dead. One was too monumental; the other ignored that so many dead were not officially counted due to lack of testing.

“The Woods of Memory is a living monument, and it immediately seemed to us to be the most convincing, the most emotive and the one that was closest to our sentiments,’’ Bergamo Mayor Giorgio Gori said.

Only 100 trees have been planted so far of the 700 that are planned, facing the hospital’s morgue. The rest should be planted by next year’s March 18 remembrance day.

There are no plans to add names, but in at least one case, loved ones have claimed a sapling: Roses are planted at the base, with personal mementoes hanging from it and a white rock bearing the handwritten name of a dearly departed: Sergio.