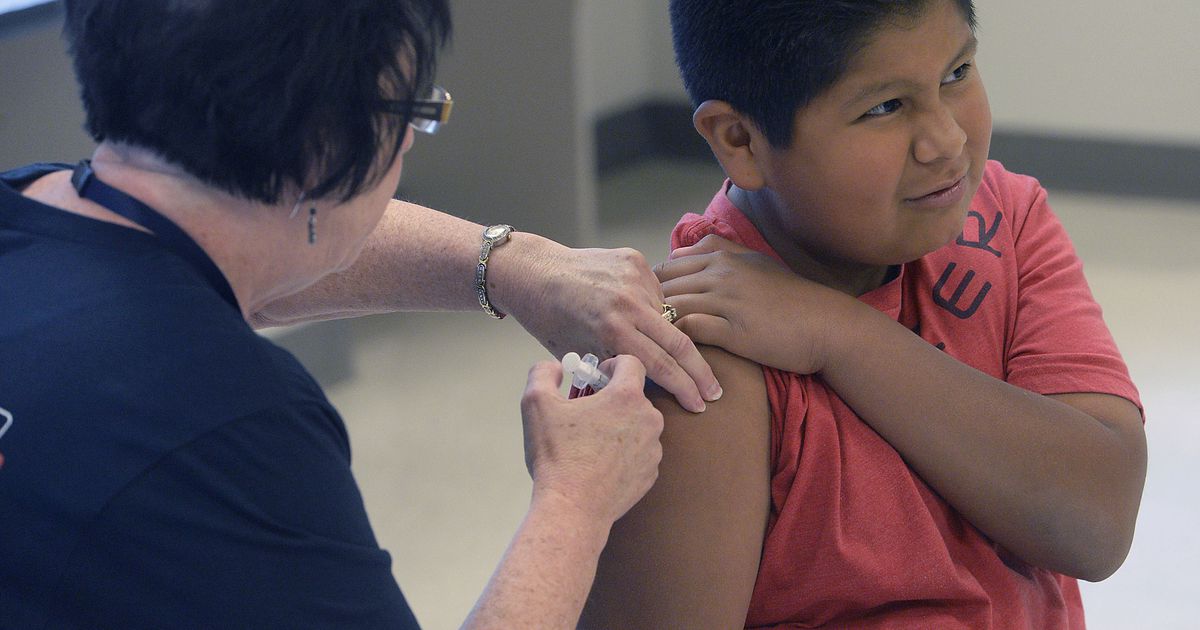 Childhood immunizations dropped drastically last year, as COVID-19 prevented many kids from making routine doctors’ visits, according to data from the Utah Department of Health.

Now health experts are worried that a swell of anti-vaccine sentiments could make it hard for Utah to get back to its pre-pandemic levels of immunity against preventable diseases.

The number of measles-mumps-rubella (MMR) and chicken pox vaccinations plummeted in 2020, with about 19,000 fewer kids receiving shots than in 2019 — a drop of about 17%.

That doesn’t mean cases of those contagious diseases rose immediately; precautions undertaken for the coronavirus also led to a yearlong lull in other communicable diseases. But health officials say that lower vaccine coverage could help to usher in new outbreaks of old diseases in coming years.

“There is a good indication that measles has kind of made a comeback,” said Rich Laken, director of the state’s immunization division. “When things kind of normalize, and people aren’t wearing masks, and they aren’t social distancing, and we have less people who are vaccinated, this could catch up to us.”

Shots for hepatitis A dropped by 13% from 2019 to 2020, with immunizations for polio and DTaP (diphtheria, tetanus and pertussis, or whooping cough) down by 10%. Shots for rotavirus, pneumococcal infections, haemophilus influenzae type B, bacterial meningitis and hepatitis B declined by 5% to 10%, with human papillomavirus vaccines down by 4%.

Measles and chicken pox vaccines likely declined more than some of the other early-childhood vaccines because they generally are given after a child is one year old, Lakin said. Even during the pandemic, many parents took their infants in for appointments during their fragile first six months, when they get vaccines like polio and DTaP.

Annual exams after that were easier for parents to miss.

“Younger children just aren’t coming to the clinic. They just aren’t getting the ‘well’ care that they normally would get. Vaccines are just part of that,” said Dr. David Cope, a family physician in Bountiful who specializes in vaccine science.

If those shots were simply delayed because children weren’t being taken to routine checkups, clinics should be seeing a high demand for vaccines this year, to provide immunizations to children who were due for them in 2020 and in 2021.

But that isn’t happening, Cope said.

The numbers “are still low,” Cope said. “I don’t think the numbers are going to be as bad as last year, but there are definitely some that we’ve missed.”

Cope said he hopes that children will get caught up as they become old enough to enter school and have to comply with Utah’s immunization requirements.

But that also may not make up the difference. While UDOH is compiling school vaccine exemption figures for fall 2021, some large districts have finished tallying theirs — and exemptions appear to be up from 2019, the last year for which the state has data.

And in the Washington County School District, 10.8% of students in all grades have vaccine exemptions this year, compared to 9.7% and 9.6% in 2019 and 2018, said district spokesman Steve Dunham.

Cope said he has worried about that since opposition to the COVID-19 vaccine has become a talking point on the political right. Republicans in Tennessee this summer suspended almost all outreach to promote childhood immunizations and the state’s vaccine director was fired amid criticism from conservatives for promoting the coronavirus vaccine. Legislators in Florida planned to “review” school requirements for common vaccines like those for polio and measles, and abandoned the plan only after backlash against the idea.

Meanwhile, a YouGov poll this month showed less than half of Republicans supported traditional childhood immunization requirements — a sharp decline since before the pandemic.

“I’ve had several patients where … they expressed concern about the COVID vaccine, and so they’ve extended that to ‘Now I’m questioning all vaccines because of how this rolled out, because I don’t trust the government, and I don’t trust the pharmaceutical industry,’” Cope said. “I’ve had patients say that exact thing to me. It is concerning.”

Sometimes he ends up spending 30 to 45 minutes trying to defend vaccines to patients who are newly worried about them because of backlash against the coronavirus vaccine.

“I try to listen to them, understand what their concerns are, try to address the science part of it, and try to separate it from the politics, the social media, the hype, the friends, the other concerns that feed into it,” Cope said.

Some patients are stridently anti-vaccine, he acknowledged, “and nothing you can say will ever dissuade them.”

But a “huge chunk” are new to vaccine opposition and are still weighing both the coronavirus vaccine and the ones that children have been getting for decades, he said.

With a highly contagious disease like measles, there isn’t much room for a new wave of resistance. About 95% of a population needs to be vaccinated to create the herd immunity needed to protect those who are medically ineligible.

Measles vaccine coverage for Utah 2-year-olds reached 91.7% in 2019 — the highest level in years, but still below the 95% threshold for herd immunity.

There haven’t been any cases of measles in Utah since outbreaks occurred in multiple states in 2017.

But with fewer kids vaccinated, a recurrence could mean not only that more Utahns get sick, but also that more children will have to miss even more school than they already have for COVID-19. State health rules require unvaccinated children to stay home, sometimes for weeks, if certain diseases are detected in schools.

“I get people’s personal choice of not being vaccinated,” Lakin said. “It means there may be larger numbers of people who will have to be excluded from school.”