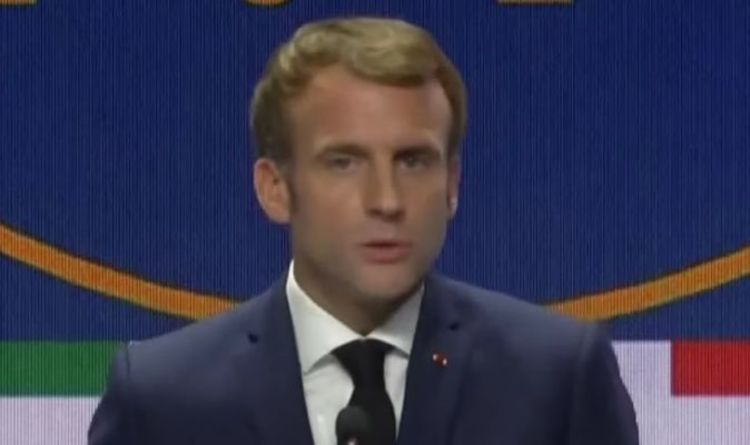 The French president has issued a stern warning to Britain at the G20 summit in Rome as he said he will not be afraid to blockade British fishing boats from entering French ports to land their catch on Tuesday unless France are granted more licences to fish in UK waters.

Furious President Macron told the audience on Sunday: “If the British don’t make a move, obviously the measures that are planned from November 2 onwards will have to be put in place!

“Because it will be a no-go, the ball is in Britain’s court!”

Despite Mr Macron’s claims, Environment Secretary George Eustice told MP’s last week that “1,673 EU vessels” have been granted licences, which is around 98 percent of applications.

He added: “This includes 736 French vessels, and 121 vessels have been licensed to fish in the UK six to 12 nautical mile zone, of which 103 are French.”

Despite the evidence, France continue to accuse Britain of not following their side of the deal, arguing they still have not been handed the agreed number of boat licences. Britain has denied that it has not been playing fairly.

UK fishing licensing bodies have also claimed that a raft of French fishing boats did not correctly submit the evidence required to prove they have fished in British waters before Brexit, a requirement under the new rules.

While Jersey’s Home Affairs Minister Gregory Guida accused some French fisherman of “trying their luck” through a scam, insisiting that Jersey fishing authorities have found no evidence from a number of boats that they have ever fished in UK waters before, a requirement under the new laws if a boat wishes to be granted a licence.

The comments follow a furious rebuke by Prime Minister Boris Johnson to a letter penned by French PM Jean Castex who called on Britain to be punished for Brexit and the fishing row in a ferocious open letter to European Commission President Ursula von der Leyen.

Speaking from the G20 in Rome on Sunday, Mr Johnson hammered: “I’ll just say this for the record: I must say I was puzzled to read a letter from the French Prime Minister explicitly asking for Britain to be punished for leaving the EU!

“I just have to say to everybody I don’t think that is compatible either with the spirit or the letter of the Withdrawal Agreement or the Trade and Cooperation Agreement. That is all I will say about that one!”

Mr Johnson was clear the position on fishing rights and licences remains “unchanged” for Britain.

In one part of the letter, Mr Castex slammed: “It, therefore, seems necessary for the European Union to show its total determination to obtain full respect for the agreement by the United Kingdom and to assert its rights by using the levers at its disposal in a firm, united and proportionate manner.

“It is essential to clearly show to European public opinion that respect for subscribed engagement is non-negotiable and that there is more damage in leaving the union than in remaining there.”

He suggested to Ms Von der Leyen that they could impose “customs duties on certain fishery products” as punishment in a furious call for action against the UK.

The row has now reached boiling point after the French have threatened to blockade British fishing vessels landing their catch in French ports from tomorrow (Tuesday November 2).

Such a move could bring the British fishing industry to its knees and send relations between the UK and EU tumbling further.