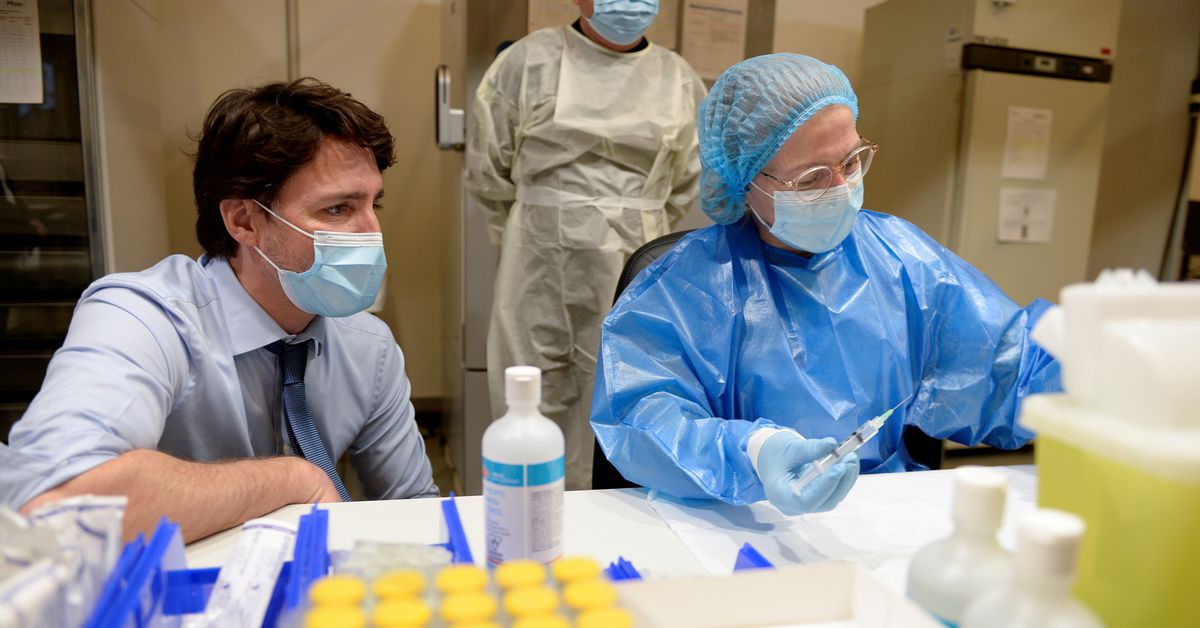 Federal employees will be required to declare their full vaccination status through an online portal by Oct. 29. Workers and passengers age 12 and older on trains, planes and marine transport operating domestically – which are federally regulated – must show they have been inoculated by Oct. 30.

“These travel measures, along with mandatory vaccination for federal employees, are some of the strongest in the world,” Trudeau told reporters. “If you’ve done the right thing and gotten vaccinated, you deserve the freedom to be safe from COVID.”

There are almost 300,000 federal service workers, plus 955,000 federally regulated workers, representing about 8% of Canada’s full-time workforce, according to the Treasury Board, which manages the public service.

The government’s new vaccine mandates were a cornerstone pledge by Trudeau during his campaign for re-election last month. The Liberals returned to power in a closely contested election, but fell short of winning a majority.

Canada has fully vaccinated more that 80% of its eligible population ages 12 and over.

Canada’s neighbor to the south, the United States, said last month most federal employees must be fully vaccinated against COVID-19 no later than Nov. 22, while federal contractors must be vaccinated by Dec. 8. The U.S. government also is drafting rules to require large employers to have their workers inoculated or tested weekly.

Some other countries also have pursued vaccine mandates for government employees. Fiji in August forced public workers to go on leave if unvaccinated. If still not inoculated by November, they would lose their jobs. Later this month, Italy will require proof of vaccination, a negative test or recent recovery from infection for all the country’s workers.

During his re-election bid, Trudeau often faced anti-vaccine protesters, one of whom hurled a handful of gravel at him at a campaign event last month. His main opponent, Conservative leader Erin O’Toole, opposed vaccine mandates.

The mandate for federal employees is likely to be challenged in court, said Daniel Lublin, a Toronto-based employment lawyer.

“There will be claims,” Lublin said, noting that unpaid leave could be challenged as effective termination or unjust dismissal.

The Public Service Alliance of Canada (PSAC), which represents 215,000 federal workers including 8,500 border guards, said that while the union supports the government’s vaccination stance, the policy was set out without proper consultation.

The union was given a draft only late on Friday, said Chris Aylward, PSAC president.

“The way that this policy was announced leaves us basically with our hands up in the air saying, how is this going to be implemented?” Aylward said in a phone interview. “This was simply an opportunity for the prime minister… to tick off an election promise.”

The National Airlines Council of Canada, which represents the country’s major air carriers, said it welcomed the rules but “urgently” needed to engage with officials about implementation.

Members of the Royal Canadian Mounted Police (RCMP) are among those who must be vaccinated, and the government has asked the head of the armed forces staff to require inoculations.

A spokesman for the National Police Federation, which represents the nearly 20,000 RCMP employees, had no immediate comment.

Canada’s vaccine mandate for federal workers, first promised on Aug. 13, will be reassessed every six months and stay in place until the policy is no longer required, one official said.

For travelers, a negative COVID-19 test will not be accepted as a replacement for proof of vaccination after Nov. 30, officials said. Children under 12 who are not eligible for vaccination will be exempted from the travel mandate.

The government also said it is working with industry to put a strict vaccine requirement in place for cruise ships before the resumption of the 2022 cruise season.

Reporting by Steve Scherer and Julie Gordon in Ottawa; Additional reporting by Ankur Banerjee in Bengaluru and David Shepardson in Washington; Editing by Will Dunham, Saumyadeb Chakrabarty and Bill Berkrot