Eighteen days after Cleo Smith was abducted from her family’s tent at the Blowholes campsite on October 16, Police Commissioner Chris Dawson received a late-night briefing.

His officers had identified a house. They believed the four-year-old could be inside — but could not be 100 per cent sure.

As they had for almost three weeks, those at the top of special Taskforce Rodia put their heads together to work out what they should do.

They had to make a tough call. Do we break that door down or not?

They were watching a 36-year-old man but he was not at the house.

Officers pulled a car over around midnight, and arrested that man — Terry Kelly. But they still did not know exactly what was behind that front door.

“They really did not know what they were going to encounter,” Mr Dawson said.

It was at 12.46am when police made the call to smash their way into the locked house.

It was a decision that gave a mother her little girl back, WA Police one of their greatest ever results and gave Carnarvon, WA, the nation — and the world — something to smile about.

Behind the locked doors of that run-down Tonkin Crescent home — Cleo was found.

She was physically OK and in a bedroom playing with toys. 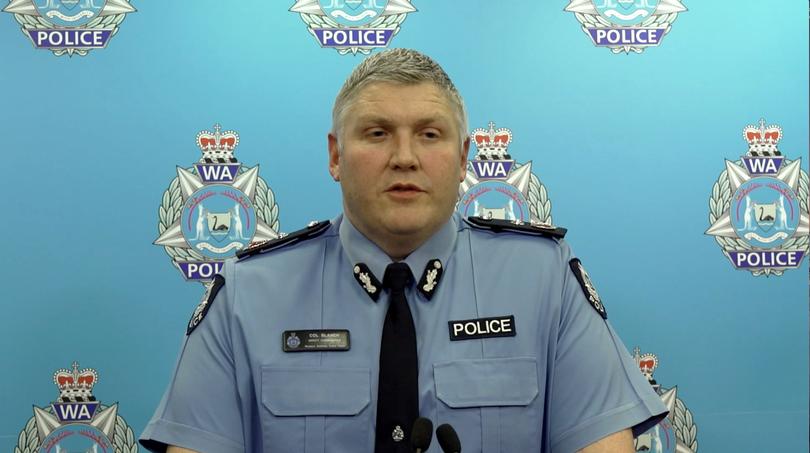 Assistant Commissioner Col Blanch told the world in a 4am announcement as WA woke to the unbelievable news.

The remarkable rescue followed an avalanche of information from the public, with taskforce boss Det-Insp. Rod Wilde revealing officers sifted through more than 1000 calls providing information.

Det-Supt Wilde said mobile phone data also played a crucial role, with officers also collecting CCTV in at every possible site in a 1000km radius of the abduction site.

A $1 million reward had been on offer since five days after Cleo was abducted, but police said it was not a tip-off that led to her rescue.

“It was the hard work of the team that did (lead to the house), analysing all that information gathering it all, working through it and finding that needle in that haystack,” he said.

“It was a methodical investigation, we had to gather all this information all of this evidence, put it all together, paint the picture of what happened, interview all the witnesses, speak to everyone who was out there, so we could understand exactly what happened.

“It’s a matter of piecing it through working out who was where at the wrong time and that’s what’s happened.”

VideoIt’ll be hard to watch this without shedding a tear. Detective Senior Sergeant Cameron Blaine describes the moment he first saw Cleo alive.

Detective Senior Sergeant Cameron Blaine — one of four officers to rescue Cleo and a father himself — struggled to hold back his emotion as he recounted what they found behind that door.

He said “it certainly looked like Cleo” — but he wanted to make sure so he asked to ask for the little girl’s name.

After reuniting with her little girl, Cleo’s mother Ellie Smith posted on Instagram a photo of her beloved daughter with the words: “Our family is whole again” alongside a red heart.

Shortly before the reunion, body-worn footage captured Cleo clinging to an officer as Det. Sen-Sgt Blaine asked her if she was OK, telling she was going to be taken to see “mummy and daddy”. 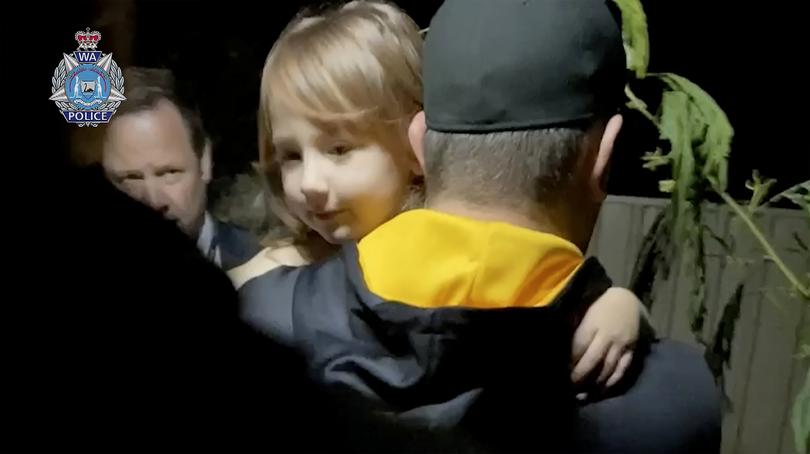 Camera IconCleo Smith in the arms of police officers, moments after the raid. Credit: AP

Mr Blanch said the footage would be “burned into my memory for life”.

“We now have returned Cleo to her loving parents. It’s a wonderful day for this little girl and her loving family,” he said. “It’s a really special day for Western Australia — indeed I know the nation is rejoicing.”

Mr Dawson thanked the 140 officers who worked tirelessly on the case, adding: “I’m the proudest police commissioner, I think in the world at the moment”.

He looked down at the photograph he was holding of little Cleo in her hospital bed, holding a icy pole in one hand and waving with the other, saying: “We said we wouldn’t give up, we said we would keep on searching — and we dared to hope.” 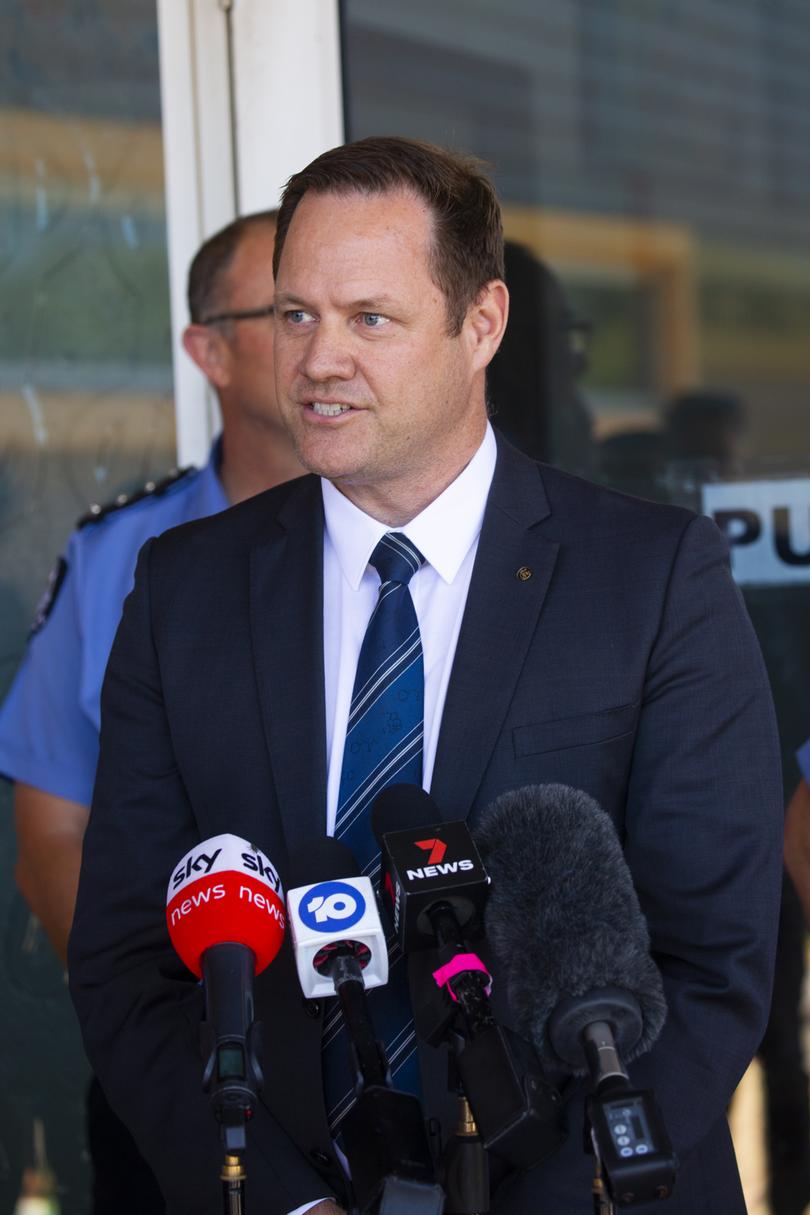 “Western Australians are already incredibly proud of our police force … now they have added reason to be incredibly proud .. for delivering Cleo from this nightmare and bringing a little bit of sunshine into an otherwise dark world.”

As for the man police will allege took the little girl from her parent’s tent, he spent the morning in custody being interrogated by detectives.

However, he later had to be rushed to the Carnarvon hospital, guarded by three police officers, after he injured his head inside his cell.

The West Australian understands the man had also undergone psychiatric assessment after being deemed not mentally stable.

Mr Dawson visited Cleo’s family at their home late on Wednesday. Last night, it is believed she has not yet been interviewed in detail about the ordeal.

It is also understood a team of Perth-based detectives attached to the child abuse squad, trained to investigate crimes involving children, are set to travel to Carnarvon to help with the interview process. 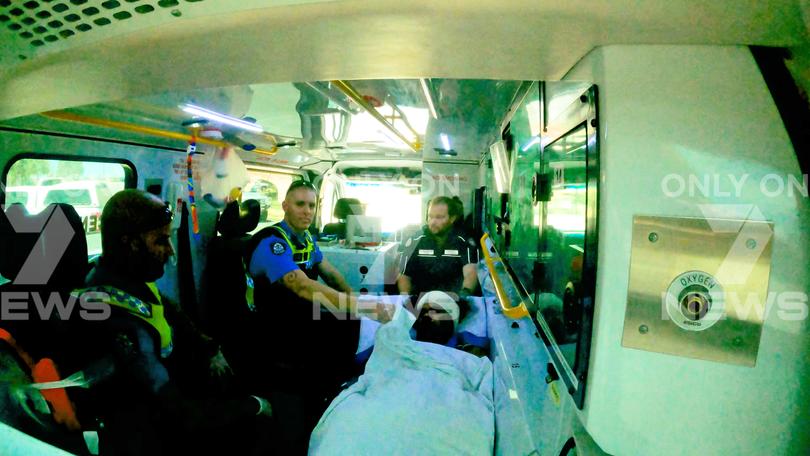 Mr Dawson said it was “paramount” to keep Cleo’s welfare at the forefront while the investigation continues.

“This journey has been tough to date but it’s not going to be something you can just simply close off and say ‘well it’s all over with’.”

Mr Dawson said it was a privilege to meet the brave four-year-old and said it “was an absolute privilege to just be able to see Cleo in mum’s arms”.

“(Her disappearance) was a massive ordeal for the family,” he said.

“But for the moment they are doing as well as expected — they are just kissing each other — it was a beautiful opportunity just to reinforce to the family that we will walk with them and continue to be with them.”

“It was an absolute privilege to just be able to see Cleo in mum’s arms,” he said.

It is expected police will remain in Carnarvon for several weeks as the investigation continues. On Wednesday, Mr Dawson and Mr Papalia spoke with local Aboriginal leaders about the investigation.

Police were on Wednesday night still considering what charges would be laid — and when.