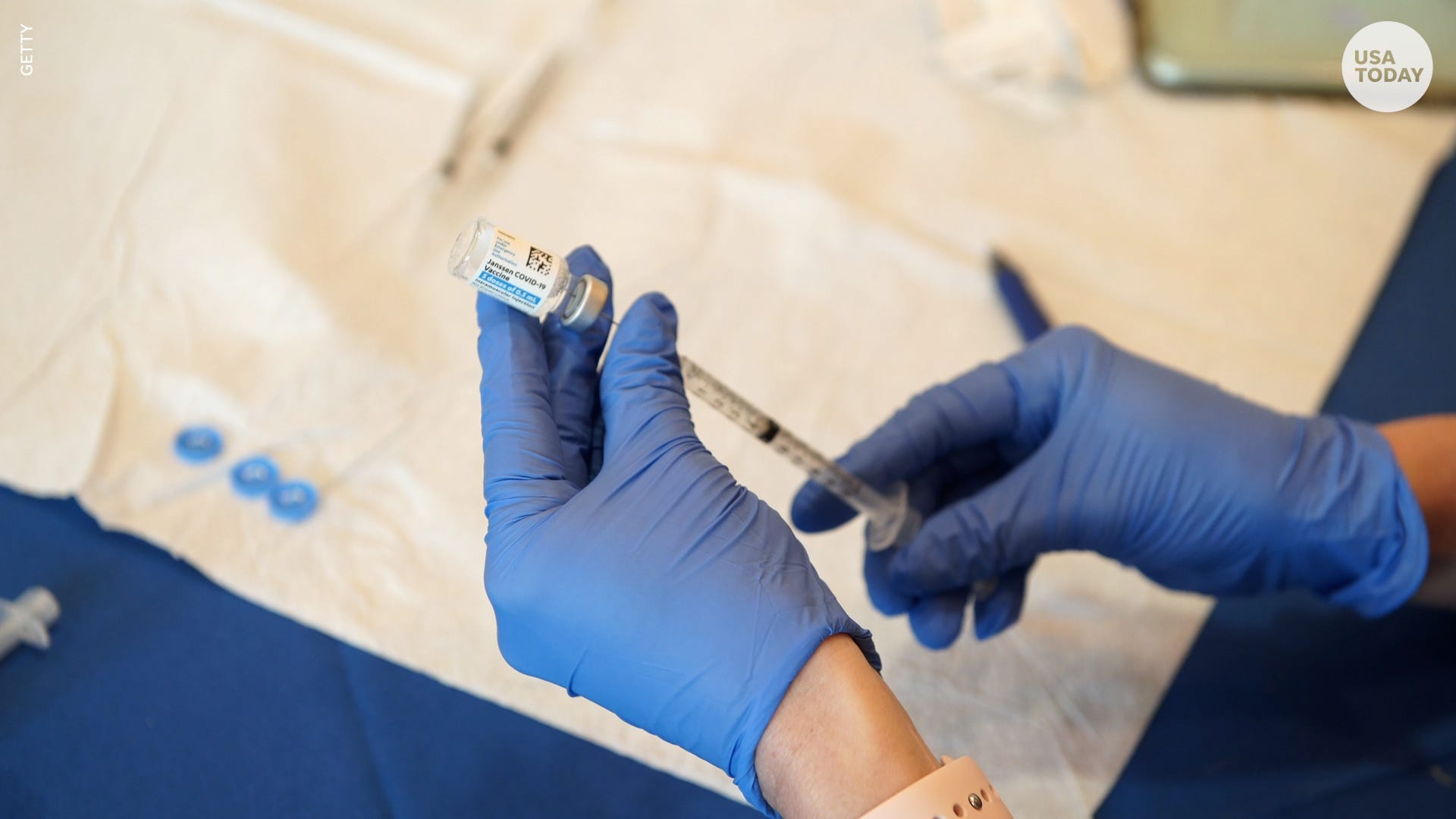 The committee said the J&J vaccine should be considered a two-dose vaccine instead of “one and done.”

The death from COVID-19 complications of former Secretary of State Colin Powell on Monday figures to add fuel to those who oppose vaccines, considering his family said he was fully vaccinated.

In reality, Powell’s passing at 84 actually underscores the importance of vaccination against the coronavirus.

The Centers for Disease Control and Prevention said that among the more than 187 million Americans who were fully vaccinated as of Oct. 12, it had received reports of 7,178 deaths from breakthrough infections. That’s one fatality for every 26,000  vaccinated people, a powerful testament to the vaccines’ effectiveness at preserving lives against a disease that has killed nearly 725,000 in this country.

“But the mortality rate for vaccinated people is 11 times less than unvaccinated. People still die from the disease, especially if you are 84 and have underlying health risks. He is one of the unfortunate ones, but he was very high risk.”

Powell reportedly had battled Parkinson’s disease and multiple myeloma, a cancer that impairs the body’s ability to fight infections.

Even among seniors in their 80s, who tend to have more underlying conditions that make them susceptible to disease, the unvaccinated have died of COVID at six times the rate of those who got the shots.

Powell’s death, mourned by his many admirers internationally, was the exception to the vaccines’ protection, not proof they don’t work, health officials say.

Also in the news:

►The Navajo Nation has reported no COVID-19 deaths for the 11th time in the past 17 days. The latest numbers released Saturday pushed the tribe’s totals to 34,814 confirmed COVID cases from the virus since the pandemic began.

►Russia reported its largest daily number of new coronavirus infections, more than 70% up on the figure a month ago as the country faces a sustained rise in cases.

📈Today’s numbers: The U.S. has recorded more than 45 million confirmed COVID-19 cases and more than 725,000 deaths, according to Johns Hopkins University data. Global totals: More than 241 million cases and 4.9 million deaths. More than 189. million Americans – 57% of the population – are fully vaccinated, according to the CDC.

📘 What we’re reading:  ”Hours of my life I’m never going to get back”: As many offices reopen after being shuttered during the COVID-19 health crisis, roughly 40% of workers say they want to continue working remotely. And for some, not having to commute on crowded trains, slow-moving buses or in their cars is one of the biggest perks of working from home.

Keep refreshing this page for the latest news. Want more? Sign up for USA TODAY’s Coronavirus Watch newsletter to receive updates directly to your inbox and join our Facebook group.

The Food and Drug Administration may give its OK this week to administering booster shots that are different from recipients’ original COVID-19 vaccine, the New York Times reported Monday. The decision would fulfill the requests of state health officials, who have been seeking increased flexibility in giving the vaccines.

On Friday, an expert panel that advises the FDA recommended booster shots of the Johnson & Johnson vaccine a day after voting in favor of the Moderna booster. That same committee received the results of a study that showed recipients of the J&J vaccine would get enhanced protection from a second dose of either the Moderna or Pfizer vaccine, which rely on a different technology.

Pfizer boosters were authorized for certain populations last month. The Moderna and J&J boosters are expected to be cleared this week.

Some studies have found benefits in combining different vaccine shots as part of the initial protocol, but there isn’t a uniform consensus about the practice yet.

A “very small number” of Chicago police officers were sent home without pay and could face disciplinary action after they declined additional opportunities to report their vaccination status Monday, Mayor Lori Lightfoot said.

Chicago has been engaged in an escalating dispute with the police union over the city’s vaccination policy. On Sunday night, Police Superintendent David Brown threatened in a memo to fire officers who don’t comply with the policy, adding that those who retire rather than adhere to the requirements might be putting their retirement benefits at risk.

Nearly 36% of Chicago’s police officers did not comply with a city mandate to report vaccination status, the most of any department in the city, according to city data released Monday. More than 4,500 officers did not report their vaccination status, encouraged by the union to flout the mandate. Of the 8,227 officers who reported their status, 1,333 said they were unvaccinated, or 16%.

Republican Sen. Ted Cruz of Texas ventured into Australian politics last week with a tweet critical of the country’s pandemic response. On Monday, someone who’s actually involved in Australian politics — Michael Gunner, chief minister of the Northern Territory — essentially told Cruz to stay in his lane.

Among other bits of information shared via tweet, Gunner pointed out the Northern Territory, with a population of about 250,000, hasn’t had a single COVID death, compared to nearly 70,000 in Texas. Gunner also said the Northern Territory has been under lockdown for only eight days during the pandemic, and its schools and businesses are currently open.

“We don’t need your lectures, thanks mate. You know nothing about us,” Gunner wrote. “And if you stand against a life-saving vaccine, then you sure as hell don’t stand with Australia.”

The rebuff was in response to Cruz’s tweet Wednesday, in reaction to Australia’s vaccine mandate.

“I love the Aussies,” Cruz wrote. “Their history of rugged independence is legendary; I’ve always said Australia is the Texas of the Pacific. The Covid tyranny of their current government is disgraceful & sad. Individual liberty matters. I stand with the people of #Australia.”

A prominent one among them doesn’t stand with Cruz.

Police officers and other public safety workers have a responsibility to get vaccinated, the nation’s top infectious disease physician said Sunday.

“I’m not comfortable with telling people what they should do under normal circumstances, but we are not in normal circumstances right now,” said Dr. Anthony Fauci, director of the National Institute of Allergy and Infectious Diseases, in an interview with Fox News. “Take the police. We know now the statistics, more police officers die of COVID than they do in other causes of death. So it doesn’t make any sense to not try to protect yourself as well as the colleagues that you work with.”

COVID-19 is the leading cause of death for American law enforcement officers, according to the Officer Down Memorial Page, a nonprofit tracking police officer deaths.

Police unions and officers have pushed back on vaccine mandates by filing lawsuits to block them. In Chicago, the head of the police union called on members to defy the city’s deadline for reporting their COVID-19 vaccination status. Seattle’s police department sent detectives and non-patrol officers to emergency calls this week because of a shortage of patrol officers, which union leaders fear will become worse because of vaccine mandates.

“Think about the implications of not getting vaccinated when you’re in a position where you have a responsible job and you want to protect yourself because you’re needed at your job, whether you’re a police officer or a pilot or any other of those kinds of occupations,” Fauci said.

Judges are struggling with the question of whether they have the power to order hospitals to give grievously ill COVID-19 patients ivermectin, a drug that hasn’t been approved for use to treat people with the virus.

“So every drug combination cocktail or procedure that is debated as to its efficacy … the hospital is going to be taken to court?” Nutt asked. “It’s problematic where this is going.”

Judges in New York, Ohio and Delaware ruled that hospitals couldn’t be compelled to administer ivermectin. However, a Jacksonville, Florida, judge last month ordered a hospital to give it to a COVID-19 patient, according to records submitted to Nutt.

At least two lawsuits have been filed nationwide seeking to force a hospital to administer ivermectin.

At the Loma Verde Recreation Center south of San Diego, demolition work is underway on a $24 million project that will rebuild the facility from the ground up, complete with a new pool. An hour’s drive to the north, the iconic bridge to the Oceanside pier is deteriorating because the city lacks the money for a roughly $25 million rehabilitation.

A reason one project is moving ahead and the other isn’t revolves around the American Rescue Plan – the sweeping COVID-19 relief law championed by President Joe Biden and congressional Democrats that is pumping billions of dollars to states and local governments.

Under rules developed by the U.S. Treasury Department, some governments have more flexibility than others to spend their share of the money as they want. That’s why the new swimming pool is a go, and the rehabbed pier – at least for now – is a no.

Similar disparities among cities across the country have prompted a pushback from local officials, who want Treasury to loosen its rules before the program progresses much further.