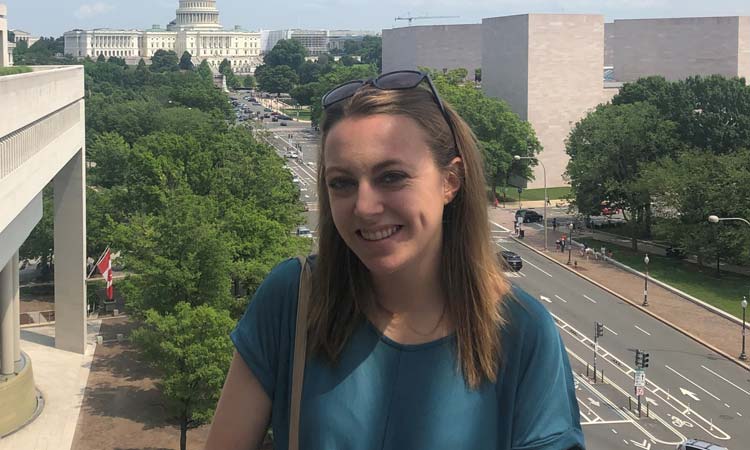 Editor’s note: This feature story on Valerie Doze ’21 is the first of six that will appear this summer about College of Saint Benedict and Saint John’s University graduates who have received awards from the Fulbright U.S. Student Program.

During her time as a College of Saint Benedict student, she studied in Austria, traveled to Poland to participate in the United Nations Framework Convention on Climate Change, went to Boston to take part in the Harvard Model United Nations and served an internship through the Jackson Fellows program with an international trade association in Arlington, Virginia.

Had not COVID-19 been a major factor, there would have been more trips. She was an undergraduate research assistant at Johns Hopkins University School of Medicine (Baltimore) in the summers of 2020 and 2021 – though she fulfilled those virtually from where she grew up in Grand Forks, North Dakota (where she also spent the summer after her first year at CSB working an internship in an epigenetics/neuroscience lab at the University of North Dakota).

Since graduating from Saint Ben’s in December, 2021, she has been a full-time research technologist at Johns Hopkins other than a visit to her parents during the holidays. But she’s about to make up for the time the pandemic forced her to be at home.

Doze is one of six CSB and SJU students who earned Fulbright Student awards for 2022-23. While the others are to be English Teaching Assistants, Doze – the fifth of six students in Saint Ben’s history to become a Truman Scholar – earned CSB’s first Open Study/Research award in three years. She’ll leave in September for Göttingen, Germany, where she’ll work with Prof. Dr. Patrick Cramer, a world-renowned chemist who is director of the molecular biology department at the Max Planck Institute for Multidisciplinary Sciences. He’s an expert on methods of how COVID replicates and antivirals combat the disease.

“It’s very exciting,” said Doze, who double-majored in biochemistry and German. “It was my top choice.”

She has gotten to know Jessie Thwaites ’19, CSB and SJU’s most recent Fulbright researcher, who received an Austrian Fulbright-Marshall Plan Award in 2019-20. Thwaites, who worked at the Austrian Institute for Space Sciences, now is a graduate research assistant at the University of Wisconsin-Madison in particle astrophysics.

If that’s hard to conceptualize, buckle your chin strap if you want to learn about what Doze will be doing. Her research project is titled “Pandemic Generation: Biochemical Characterization of New COVID-19 Polymerase Inhibitors.”

“The plan is to look at antivirals, where the mechanisms of action are within the anti-viral drugs – like Remdesivir or Molnupiravir,” Doze said. “We want to find out how these actually work biochemically and what can we learn from them. If we look at how COVID replicates, we can figure out how to target it.”

“All of my research in college had been neuroscience-based, and I knew I wanted to explore infectious disease or broader biochem research before deciding on a grad school program,” Doze said.

Doze, an avid runner and hiker who also plays the piano, wants to work at the intersection of policy, climate change and public health. Perhaps when we face our next pandemic, it will be a former Bennie providing guidance to elected officials or through TV interviews.

“She is very exceptional,” appraised Dr. Jen Schaefer, biology department chair at CSB and SJU, an adviser to Doze during her time on campus. “She usually undersells what she’s done.”

Schaefer points to Doze’s virtual internship with a Johns Hopkins lab researching brain cells. Since COVID restricted hands-on research, her supervisors used that as an opportunity to get into bioinformatics, which is defined by Merriam-Webster as “the collection, classification, storage, and analysis of biochemical and biological information using computers especially as applied to molecular genetics and genomics.”

“The (Bioconductor) software you use for that is (a programming language) called R,” Schaefer said. “It’s a statistical package that is not easy to use. It takes a great deal of training and most people who would learn it on their own would have a computer science background. The (Johns Hopkins) lab suggested that Valerie try a bioinformatics approach using R as a new way for the lab to look at their ongoing questions related to glial cell identity and development. For an undergraduate to learn and pilot test this is spectacular.”

As Doze’s career continues to rise, she also raises the profile of CSB and SJU, which she chose over Notre Dame and Santa Clara (California) University.

“The liberal arts education was really important to me,” she said. “I want to be a well-rounded learner. The professors and mentors I had at Saint Ben’s and Saint John’s were unparalleled. They were a huge part of the discovery of what I was interested in as well as in helping me to apply and receive awards like this. And the strength of the German language department has turned out a lot of Fulbrights over the years. The mentoring from there was huge in terms of them looking over my application and practice interviews.”

Doze departs for Germany in mid-September and expects to be there for at least 10 months. By then, she hopes to have made a decision on where to continue her career in graduate school. With the resume she’s putting together, she very likely will have her pick of institutions.

Wherever she goes, she’ll take her alma mater along for the ride.

“The alum network is so strong,” Doze said. “I’ve met Bennies out here in Baltimore. That’s been a nice surprise. There’s one who’s finishing her Ph.D. and a retired chem prof (Dr. Henry Jakubowski) connected us. I met another at church. I was wearing a Saint John’s shirt and she asked if I went to Saint Ben’s. And there’s a big group in DC. There’s at least one I know of in Germany already that I’ve been connected with.”

CSB and SJU students interested in applying for a Fulbright Award for the 2023-24 academic year should contact Phil Kronebusch, professor of political science and coordinator of competitive fellowships at CSB and SJU, or Lindsey Gunnerson Gutsch, director of the Office of Undergraduate Research at CSB and SJU.