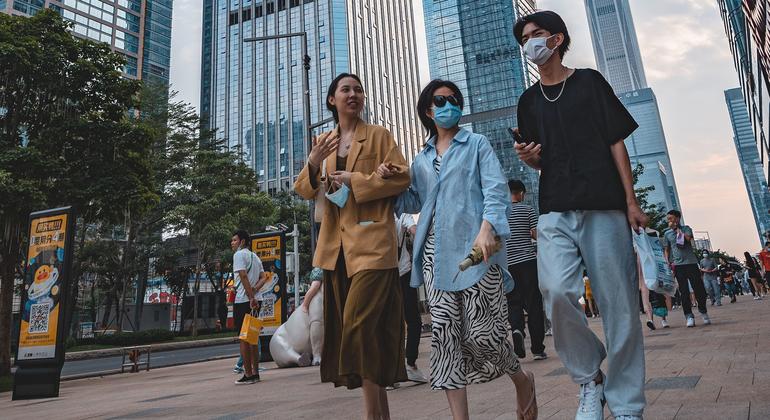 Dr. Kate O’Brien from the World Health Organization (WHO) explained that the change in China’s initial “zero-dose” policy for elderly people had left some unsure about asking for a coronavirus vaccine now.

“Clearly with the need for protection of older adults, it’s been difficult for older adults to sort of change their understanding of the recommendation and to move on from that first recommendation about adults being vulnerable. China’s making enormous progress and effort to get to every older adult with both primary doses and with booster doses.”

Dr. O’Brien, who is the UN health agency’s Director for Immunization, Vaccines and Biologicals, said that the WHO would be “looking with great anticipation” at data from China on routine immunisations for 2022.

During the height of the pandemic, many countries had supplied the WHO with vaccine data on a monthly basis, but more recently there has been notable backsliding, “and we really don’t want that to happen”, Dr. O’Brien said.

She emphasized that based on evidence, the benefits of COVID-19 vaccination greatly outweigh the potential risk of side effects of the vaccines and that the effectiveness of the current shots relies on people taking all of their recommended doses. As of January 2023, 83 per cent of the global population has been vaccinated.

“The vaccines that we have to protect from COVID-19 are…highly effective by preventing severe disease and death, though they are less effective at stopping people from getting infected or from transmitting to somebody else”, she told journalists in Geneva.

However, she said, that “maximizing this effectiveness against hospitalization, severe disease and death really does rely on people taking all the recommended doses and that’s particularly important for people who are in high-priority groups”.

No evidence for stroke link with mRNA vaccines

Dr. O’Brien noted that, based on US data that monitors vaccine safety, concern has been fuelled in recent weeks over the possibility of mRNA vaccines – such as the Moderna and Pfizer COVID shots – increasing the risk of strokes among the older population.

According to her, “the evaluation of reports…has not found further evidence to substantiate” a link between mRNA vaccine and strokes.

“But I do want to emphasize that we have already known that there is a risk of vaccine-induced myocarditis, an inflammation of the heart muscle, that has also received attention recently”.

This has been linked to COVID-19 vaccines, said WHO, but is a rare event. When it occurs, it is typically mild, responsive to treatment, and less serious than myocarditis found with COVID-19 disease, or myocarditis due to another cause.

“What I really want to emphasize is that our advice to the public remains that the benefits of COVID-19 vaccination greatly outweigh the potential risk. This is based on evidence”.

She also announced that WHO would rapidly step-up routine vaccinations for preventable diseases during the year ahead.

“We have over 50 million children cumulatively that now missed out on critical vaccines against measles, rubella, diphtheria and other of the life threating infections for which we vaccinate”, said Dr. O’Brien.