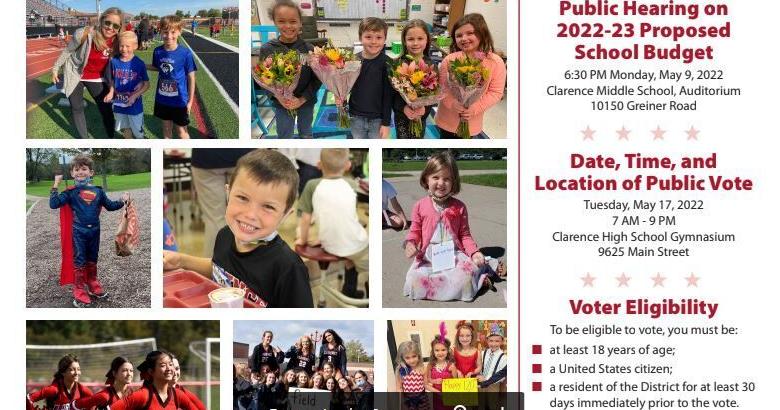 The superintendent of a Genesee County school district and a 20-year-old college student who wants to keep critical race theory out of the classroom are among six candidates running for two seats on the Clarence Central School Board.

The current board vice president is seeking re-election and is one of two candidates endorsed by the Clarence Teachers Association in the race.

In contrast, Clarence Students First, part of an organization formed to mobilize against hybrid schooling during the pandemic, said on Facebook that it has not officially endorsed a candidate in the race.

The candidates are running in a district that has seen considerable debate over mask rules, remote learning and other Covid-19 policies over the past two years. The School Board at one point in the fall shifted back to fully remote meetings after some attendees refused to don masks as part of a protest action.

Clarence also saw protests over plans for a representative of Planned Parenthood of Central and Western New York to speak at a high school health class, with district administrators rescinding the invitation following a parent and community backlash.

Trustee Mary Beth Sweeney opted not to run for election to another term.

Here’s a closer look at the candidates, based on information from the district and their campaign sites.

Bauer is a student at the University at Buffalo. She said on Facebook that she’s running for school board in large part to keep critical race theory and what she described as “radical” gender ideology out of Clarence K-12 schools.

Critical race theory is an academic framework centered on the idea that racism is systemic and harms people of color in schools, courts, medical offices and countless other parts of society. Supporters note it is rarely, if ever, taught outside of the college level.

“Divisive and hate-filled lesson plans have no place in the education of children who have yet to develop their political mindset,” Bauer wrote.

She also said she wants to prevent the return of “tyrannical” Covid-19 mandates that she said harmed students in the district, including her younger brother, citing the importance of in-person instruction to students’ well-being.

Boglioli, an attorney for Benderson Development Co., is finishing his sixth year on the School Board and has served as vice president since 2020.

He is running as part of a team with Kym Cannizzaro, including a joint advertising campaign.

He said on Facebook that they are not seeking election based on any “hot-button” issues, but emphasized the need to maintain Clarence’s standing as a high-performing district and to fulfill the responsibilities of a school board member.

Boglioli said critical race theory is a graduate-level course of study that is not taught in Clarence schools. When it comes to gender equality and identity, he said, the district follows state education law on the topic.

“We believe in treating all students with dignity and respect,” he wrote.

Cannizzaro, is a nurse practitioner at the Veterans Affairs Medical Center.

She said on Facebook that she would emphasize fiscal stability in the district, as well as the social, mental and physical well-being of its students.

She also joined Boglioli in writing that the district is obligated to follow state law on face masks and other mandates.

And, they said, regarding Planned Parenthood, that it was an annual, one-day visit from a group representative always preceded by a permission slip sent to parents and should not have come as a “surprise” to anyone.

Cannizzaro, in fact, spoke up at a school board meeting last year to say the district shouldn’t have given in to the criticism by rescinding the invitation.

Fisgus is a former Clarence School Board member, serving from 2016 to 2019, who points to his experience in school administration, most recently as superintendent of the Oakfield-Alabama district.

Fisgus as Oakfield-Alabama superintendent pushed for his students to return to the classroom as soon as possible during the pandemic. Oakfield-Alabama also joined some other Genesee County districts in asking Gov. Kathy Hochul for the right to set their own Covid-19 rules.

“You need someone on the board who will greatly support the right decisions being made, but will also question and offer up other solutions when the current outcome isn’t the answer,” he wrote on Facebook.

Hartling, an active volunteer in the district, serves as vice president of the Clarence Middle School Parent Teacher Organization.

“I will work to bring people together to rebuild trust, accountability, transparency, open communication and consensus,” she wrote on Facebook.

She also emphasized she isn’t endorsed by Clarence Students First. Western New York Students First, and its local affiliates, have drawn questions about their motivation and criticism for some hateful comments on their Facebook pages.

“As I have said throughout my campaign, I am running as an individual and not tied to any group,” Hartling wrote.

Robbins, a quality compliance consultant, said she would focus on operating the district more efficiently to save taxpayer money, as well as with more transparency for district residents.

She states that she supports “parental choice” and “medical freedom.”

The smart way to start your day. We sift through all the news to give you a concise, informative look at the top headlines and must-read stories every weekday.