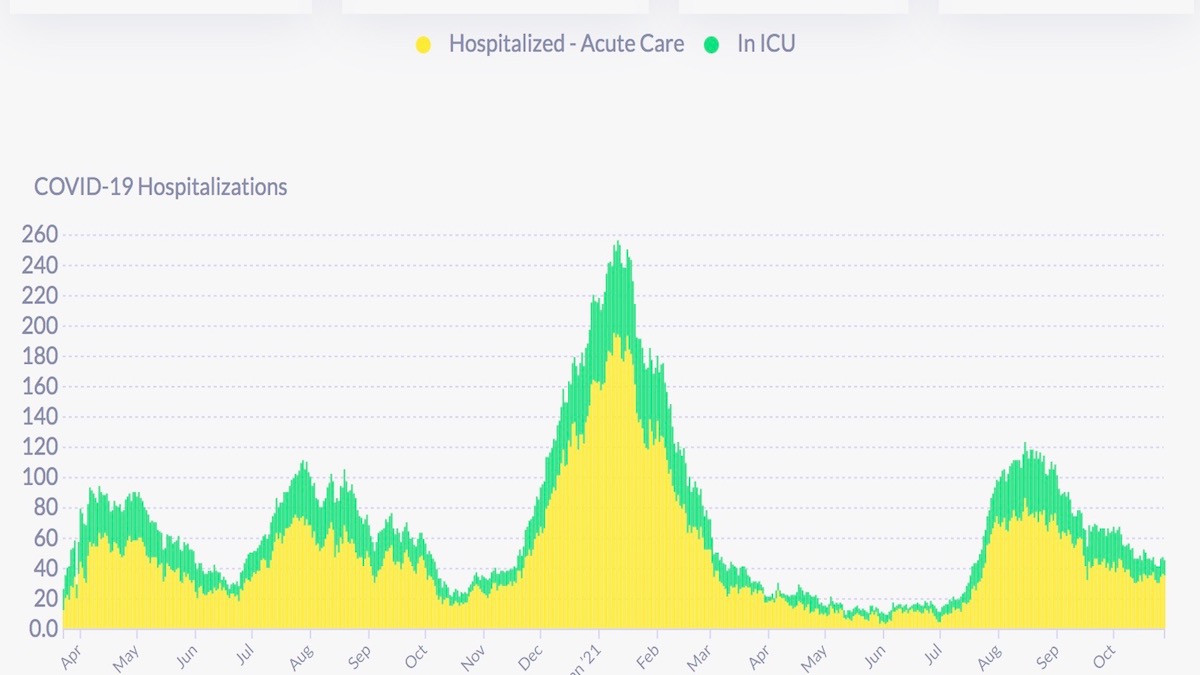 “Observational studies” suggest Grim Reaper costumes were less prevalent this year than in the past. Is this evidence of The Vaccine’s efficacy in the real world? While waiting to see what happens over the holidays, more experts weigh in on the potential covid “endgame.”

Need a new covid controversy to get your blood boiling this Monday morning? How about vaccine mandates for kids. Buckle up. It may not be “masking”, but battle lines have already been drawn.

Let’s not forget booster mandates. Here is more evidence from Israel on the efficacy of the 3rd shot.

With the FDA approval of The Vaccine for kids 5-11, are you suprised that questions are coming up? Like whether weight matters.

Stay in touch with our neighborhood.

Recent data from the CDC confirms what we already knew, even though the SF Department of Public Health refuses to provide us with the numbers: most hospitalizations are among those 65 and older and rates for those 17 and younger are very low.

Correction: DPH does provide more or less current data on the impact of covid on kids and schools. See below.

Scroll down for today’s covid numbers.

The U.S. Centers for Disease Control data used for the chart lags behind the data supplied from the San Francisco Department of Public Health. As of Oct. 31, DPH reports more than 81 percent of all San Francisco residents have received one dose, and 76 percent are completely vaccinated. Better than 90 percent of those over 65 are fully vaccinated. On Oct. 31, the seven-day rolling average of shots per day rose to 324 (we don’t know how many were boosters).For information on where to get vaccinated in and around the Mission, visit our Vaccination Page.

On Oct. 28, DPH reports there were 45 covid hospitalizations, or about 5.1 per 100,000 (based on an 874,000 population). DPH has not reported breakthrough hospitalizations and deaths since Sept. 17 in order “to conduct a thorough review of data quality and completeness.”  According to the CDC, there were 31 new admissions for the seven days ending Oct. 26  (-18.42 percent from the previous seven days). For the week ending Oct. 26, covid patients accounted for 2.34 percent of hospital beds (no change from the previous week) and 4.23 percent of ICU beds (-.78 percent from the previous week).   As of Oct. 18, the CDC says that, of more than 189 million vaccinated U.S. residents, 41,127 patients with a covid vaccine breakthrough infection were hospitalized or died (though 26 percent were either aymptomatic or not covid related). Note: 85 percent of the deaths and 66 percent of the non-fatal hospitalizations were among those 65 and older.

Another October death has been attributed to covid,  bringing the Delta total so far  (August – October) to 85  and the cumulative covid-related death toll to 662. September and October numbers should be considered “less reliable” meaning updates are likely. Last spring’s surge resulted in approximately 90 covid-related deaths recorded between August and October. For over a month, DPH has not reported on vaccination ststus and covid-related death.

A reader recently corrected me. DPH does provide current data on kids and schools. My bad.  As of October 22, DPH reports a total of 617 cases among students and staff, 451 in public schools. “The vast majority of these infections are occurring outside of schools.”  The cumulative total number of suspected in-school transmissions is 30, and the total  number of school outbreaks (3 or more cases) is 9.