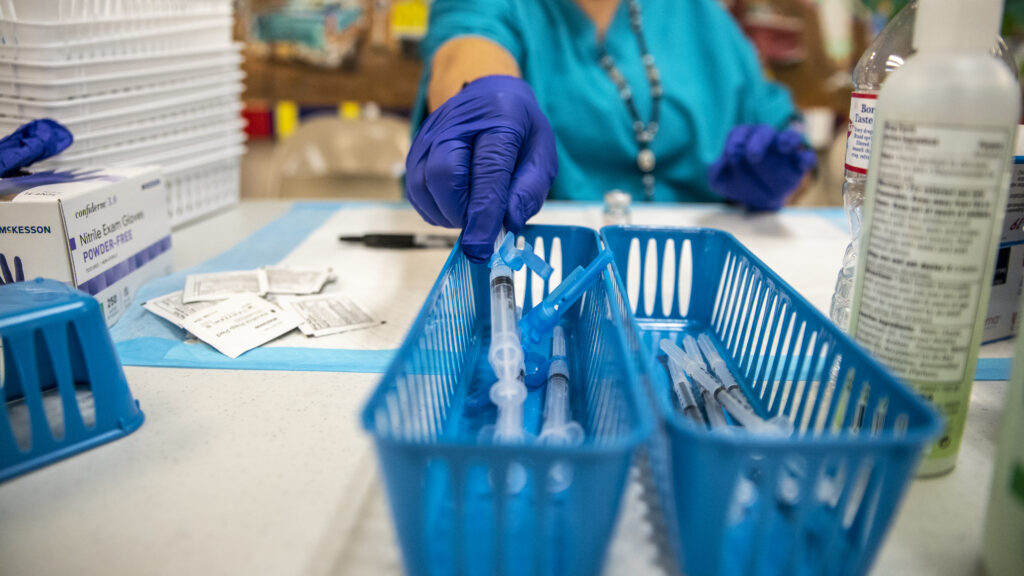 The U.S. Covid-19 vaccine rollout is about to get a lot more complicated.

When the shots arrived late last year, the message from health officials was simple: Get vaccinated when you become eligible, and get whichever jab is offered to you. But with boosters becoming available for select groups of people, and a lower-dose shot for young children expected shortly, the campaign is moving from a simple set of instructions to more of a messy flow chart for people organizing and delivering the jabs.

Take the Moderna booster. It won authorization Wednesday from the Food and Drug Administration and is expected to be recommended by the Centers for Disease Control and Prevention for people 65 and older and those with certain risk factors — the same populations for whom the Pfizer-BioNTech booster is authorized. But unlike the Pfizer shot, the Moderna booster is a half dose; it requires using the same vials that the full doses come in, but just drawing out half as much for each shot. Separate from that are the third, full doses of these mRNA shots that are already approved for people who are immunocompromised.

“Our workforce is just exhausted and they’re trying to plan for [vaccinating] kids,” said Claire Hannan, the executive director of the Association of Immunization Managers. “Some of our members didn’t even know that the Moderna was a half dose and we just started talking about it and … their jaws just dropped.”

It gets more complex from there. The FDA also authorized, and CDC is expected to recommend second doses of the Johnson & Johnson shot as soon as later today for everyone who received that shot — not just the narrower populations given the OK for the boosters of the Moderna or Pfizer shots. And while people who got Pfizer and Moderna are eligible for boosters from six months after they completed their primary series of those vaccines, people who got J&J are supposed to get their second shot two months after their first.

Moreover, the FDA revealed Wednesday that it is allowing “a “mix-and-match” approach with boosters, meaning people won’t need to get the same shot as a booster as they did for their primary series. This policy will complicate planning, making it difficult to anticipate how many doses of each vaccine will be needed in each area for the booster campaign.

And then there’s Pfizer’s shot for kids ages 5 to 11, a population of 28 million. The FDA’s advisers are meeting to discuss Pfizer’s vaccine for 5 to 11 year olds next Tuesday, which means it could be available soon after that. The vaccine will come in a different vial than the company’s adult shot, and use a smaller needle to deliver the 10-microgram dose instead of the 30-microgram dose used for youths and adults 12 and older.

Sorting all this out will fall to pharmacies, immunization programs, pediatricians, and vaccine administrators, many already stretched thin, who will also have to track inventory and try to minimize waste. It will be a quick turnaround, as well: As soon as the CDC checks the final box for boosters with its recommendations, people will start demanding them.

FDA leadership acknowledged all this will pose challenges. “Although it is not simple, it also is not utterly hopelessly complex,” Peter Marks, director of FDA’s Center for Biologics Evaluation and Research, said Wednesday on a call with reporters after the agency issued the new (Moderna and J&J) and revised (Pfizer) emergency authorizations.

Meanwhile, public health campaigns are still trying to reach the tens of millions of eligible people who are entirely unvaccinated.

Umair Shah, the health secretary in Washington state, noted that public health agencies are still keeping up with Covid-19 data, testing, and responses, and in some places are still dealing with a Delta variant-driven surge. “It’s not like those same people that had been responding to Covid-19, those other responsibilities or other efforts went away,” he told STAT.

On top of that came the vaccine campaign. “Then you have boosters, then you have 5-to-11 year olds,” Shah said. “You have additional layering on top of what public health has been doing.”

Providers and public health officials say they have experience with storing and delivering different products with other vaccines, and are preparing for how they’ll handle the next phase of the campaign to protect people from Covid-19. They’re educating vaccine administrators and building out systems to ensure that people get the right dose when they come in for their shots — whether the primary series or a booster.

At Sterling Ransone’s Deltaville, Va., family medicine practice, he’s drawn up a chart outlining which groups are eligible for which shot and the spacing recommendations between doses of the different shots. He and his nursing staff have also gone through how to keep different doses of the shots separate as they’re drawn from vials, establishing a color-coded system with different baskets for primary adult shots, the Moderna booster, and shots for younger children once they’re available.

“You have to pause and think about all these things,” said Ransone, the president of the American Academy of Family Physicians. “What are the current recommendations, what do you need to do?”

At a meeting of the FDA’s vaccines advisory committee last week, one of the panelists raised the specter of “inappropriate dosing” — meaning the dosages being mixed up — with Moderna. He asked Jacqueline Miller, the company’s head of infectious diseases therapeutics, about the possibility of different vials for the primary versus the booster shot. But Miller said the company would still provide the same vials from which administrators can draw either a 100-microgram dose or a 50-microgram booster dose, with plans for additional training.

“We recognize that this will require some education and enforcement,” Miller said. “And so we are preparing to send a ‘Dear Health Care Provider’ letter explaining how the doses are to be administered.”

The different dose of the Moderna booster isn’t just an added complexity for people delivering the shots at an individual level. Hannan said it would be an additional challenge for immunization programs trying to monitor their supply and usage when the number of doses that are being drawn from one vial will start to vary.

“You’re basically trying to track inventory in a 14-dose vial that now can be a 28[-dose] vial, or anywhere in between,” she said.

For months, the U.S. has been awash in vaccine supply, and Biden administration officials have touted that the country has also secured plenty for boosters as they become authorized.

But when it comes to the 5 to 11 year olds, public health officials say they’re not sure what kind of supply of the pediatric vaccine immunization programs will be getting initially from the federal government — and how much interest there will be from parents at first. Shah said Washington state has tried to model that demand, but that there were still unanswered questions. Survey data from the Kaiser Family Foundation indicate that about a third of parents say they will vaccinate their 5 to 11 years olds “right away” once the shot is authorized, though parents have warmed up gradually to shots for older children since they were green lit.

“There’s a limit to what states can order, and it’s a little bit of an unknown about what we will see in terms of demand from parents and the children that they’re bringing in,” Shah said.

The Biden administration outlined its plans for the pediatric vaccination rollout this week, ahead of next week’s discussions on the authorization. They involve enlisting pediatricians, community and rural health centers, and pharmacies. Jeff Zients, the White House’s Covid-19 response coordinator, said the federal government will have sufficient supply for states, tribes, and territories to roll out millions of doses. The shipments will also include the smaller needles required to deliver the shots.

“We will be ready to get shots to arms,” Zients said.