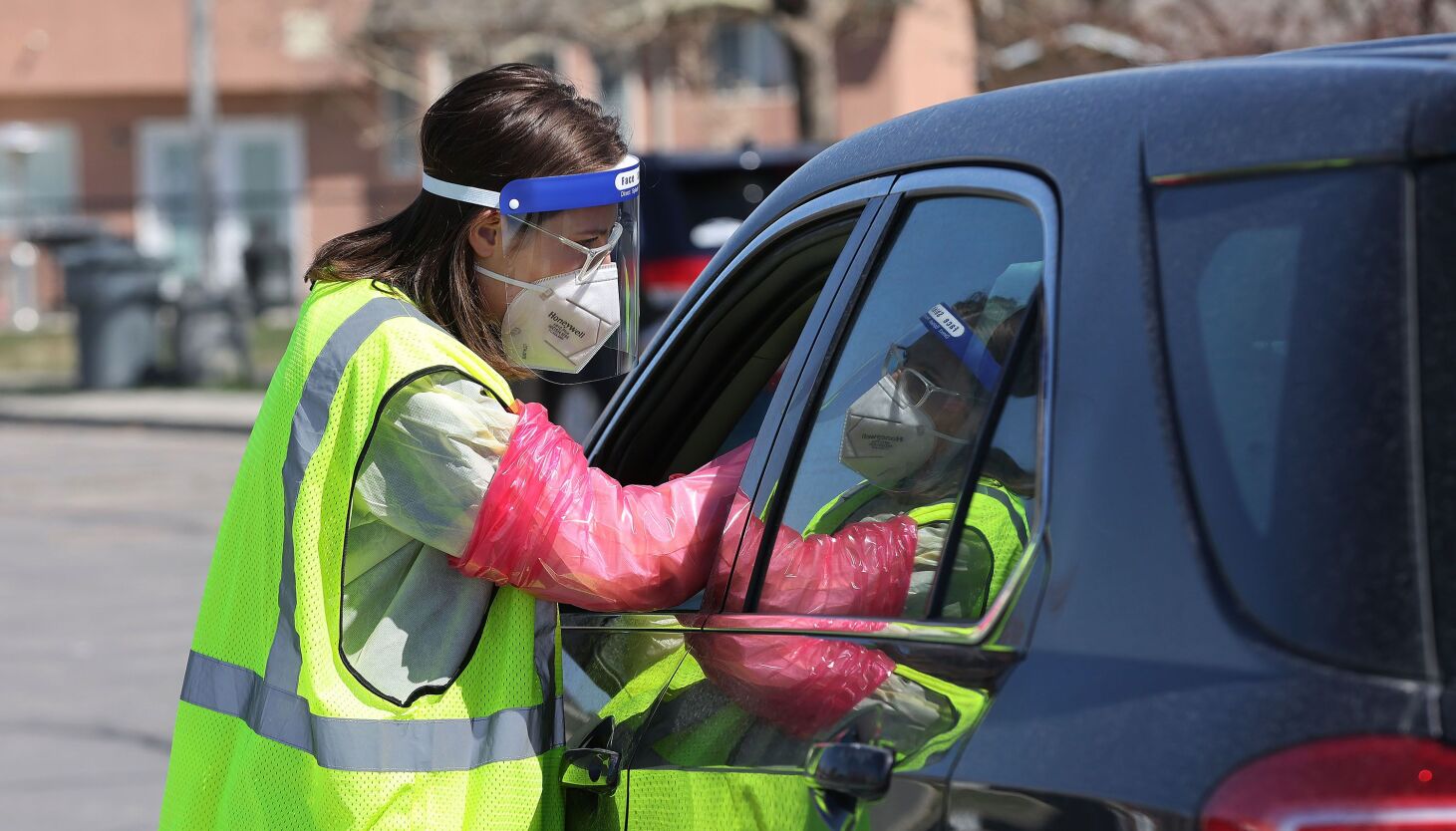 The number of new COVID-19 cases in Utah could jump to 2,000 a day by mid-June — more than four times the current daily average — and remain that high for at least another month, according to the latest modeling by the Utah Department of Health.

That trajectory could signal a resumption of state testing, treatments and vaccinations for the virus that ended for the general public in March, said Sam LeFevre, the state health department’s Office of Communicable Diseases director, who ran the projections Friday.

“We don’t want to scare the public, so I’m not going to tell you what it is,” LeFevre told the Deseret News when asked what specifically would trigger the state to take action under the “steady state” pandemic response put in place earlier this year by Gov. Spencer Cox, who announced Thursday he’s tested positive for COVID-19.

“We’re not there yet, but the trigger would be to start reevaluating,” LeFevre said, because the state is seen as “heading towards an emergency or we could hit it and we want to make sure that we are actually starting to think about, OK, what do we need to do” to be ready.

That includes being able to pick up COVID-19 services again that have been largely turned over to private providers, he said, as well as ensuring that Utah’s hospitals are equipped to handle what could be an overwhelming number of patients.

Utah’s case counts are already heading up, increasing 3,385 as of Thursday over the previous week.

“We’re getting close, but we’re still below it,” LeFevre said of reaching the point where a COVID-19 emergency is deemed likely. But if the latest projections he interpreted as pushing case counts to between 1,500 and 2,000 a day within 30 days hold true, it’s only a matter of time.

“We’ll have achieved it by 60 days,” LeFevre predicted, although Utah’s case counts would still be around half of what they were during last fall’s surge driven by the delta variant of the virus that made Utah and the Intermountain West the nation’s hot spot.

His modeling shows that in the next 30 to 60 days, case counts will stay steady, unlike the enormous spikes seen during the recent omicron surge that broke records, with more than 13,000 new cases reported in a single day in mid-January. Friday’s projections are only the second done since then and use new modeling, LeFevre said.

“We are starting to see more cases here in Utah. I think we just had like a 21⁄2-month break, where we got super hard-hit in January and February and then, I don’t know about you, but I enjoyed March,” Nolen said. “Truly, we had very little COVID in the state for probably about this last six weeks. But unfortunately, that’s now changing.”

Nolen said not only are there more cases, more Utahs are headed to emergency rooms and even to the hospital.

“We’ve been watching the rest of the country slowly get hit by the wave. I think we’re just getting that now. We’re just at the beginning of it. Certainly, it’s something to keep an eye on,” she said, driven by new mutations of the omicron variant that are considered even more easily transmissible.

But that’s not the only reason the virus is spreading again, Nolen said.

“A lot of people have stopped doing things to protect themselves. During January, a lot of people were wearing masks. Those of us who avoided infections in January now are being more casual and are putting ourselves at risk of getting this next wave,” she said.

Utahns should consider wearing a mask to protect themselves against infection when they’re around groups of people they don’t know well and avoid crowds when there’s “not good air movement,” Nolen said.

Even being vaccinated and boosted against COVID-19 hasn’t stopped some from experiencing breakthrough cases, such as Utah’s governor and Utah House Speaker Brad Wilson, R-Kaysville, who said he tested positive Friday. There have already been a number of high-profile cases back East, including Vice President Kamala Harris.

“Certainly, it’s not what we would want. We want it to be 1,000 times, right? Like, we want the vaccine to be as strong as possible. It’s not perfect. There’s no question about that. But it is still quite good and even during omicron we saw that,” Nolen said.

“We’re going to have to accept this virus is going to be with us for quite a while. It’s going to be something that hopefully the vaccines continue to have the protection, so it can be more of a nuisance and a difficulty in our lives than a total life-changing thing,” Nolen said. “It’s going to come in waves. I think we all have to get ready.”