Inland up the Midlands Road, off to the west of Great Northern Highway after Bindoon, are the agricultural centres of Carnamah, Coorow, Three Springs, Mingenew and Mullewa. Coalseam Conservation Park, between Mingenew and Mullewa, inevitably serves up pink, gold, cream and white everlastings, orchids and a good mix of other spring flora, all set against its terrain of rugged cliffs, rocky outcrops and red soil.

Up the coast are the big hotspots of Badgingarra, Dandaragan, Eneabba, Port Denison, Chapman Valley and the Geraldton area.

And that, of course, all combines into a good round-trip drive route.

The region is full of history and heritage, reserves and nature trails. 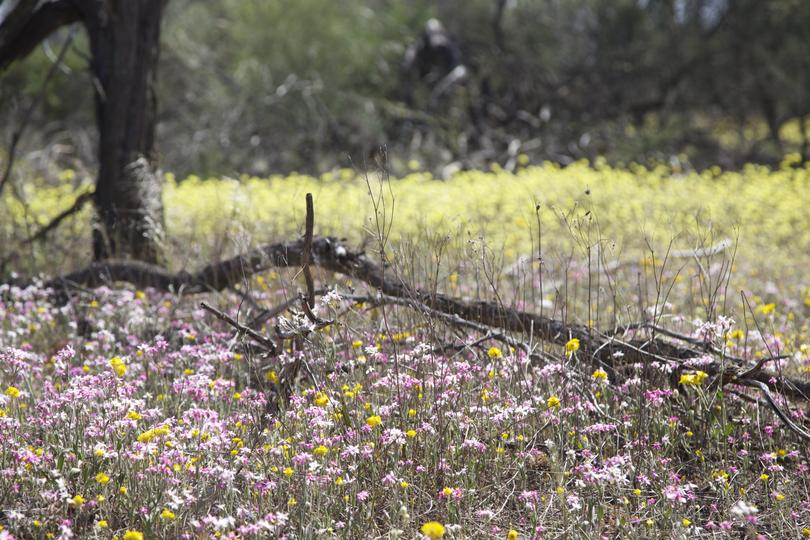 Nine areas have got together to form Western Australia’s Wildflower Country.

The group includes the nine local government areas of Carnamah, Coorow, Dalwallinu, Greater Geraldton — including Mullewa, Moora, Morawa, Mingenew, Perenjori and Three Springs. Wildflower Country runs from Moora in the south to Dalwallinu in the east, and from Mullewa in the north to Green Head and Geraldton in the west. wildflowercountry.com.au

The main drives through Wildflower Country are:

+ Wildflower Way — the most eastern route.

+ The Midlands Route is the most central route, avoiding the main highways.

+ And both the Brand Highway and Indian Ocean Drive will also lead travellers through Wildflower Country.

+ Coral Coast Highway is the name which now covers the 1250km coastal drive from Perth to Exmouth.

It’s a good time of year to walk in Kalbarri National Park. Look for woody pear, acorn banksia and purple thryptomenes on the Loop walk, acacias at Nature’s Window and claw flowers, white grevillea and orchids at Z Bend.

In the river gorges and at Four Ways, be on the lookout for pink poker, orchids and Murchison bells.

In Coastal Cliffs National Park, I head to Island Rock and Natural Bridge, Eagle Gorge and at Pot Alley. Look out for Murchison roses, and acacias along the roadside.

And watch for fan flowers beside the roads around Kalbarri town. 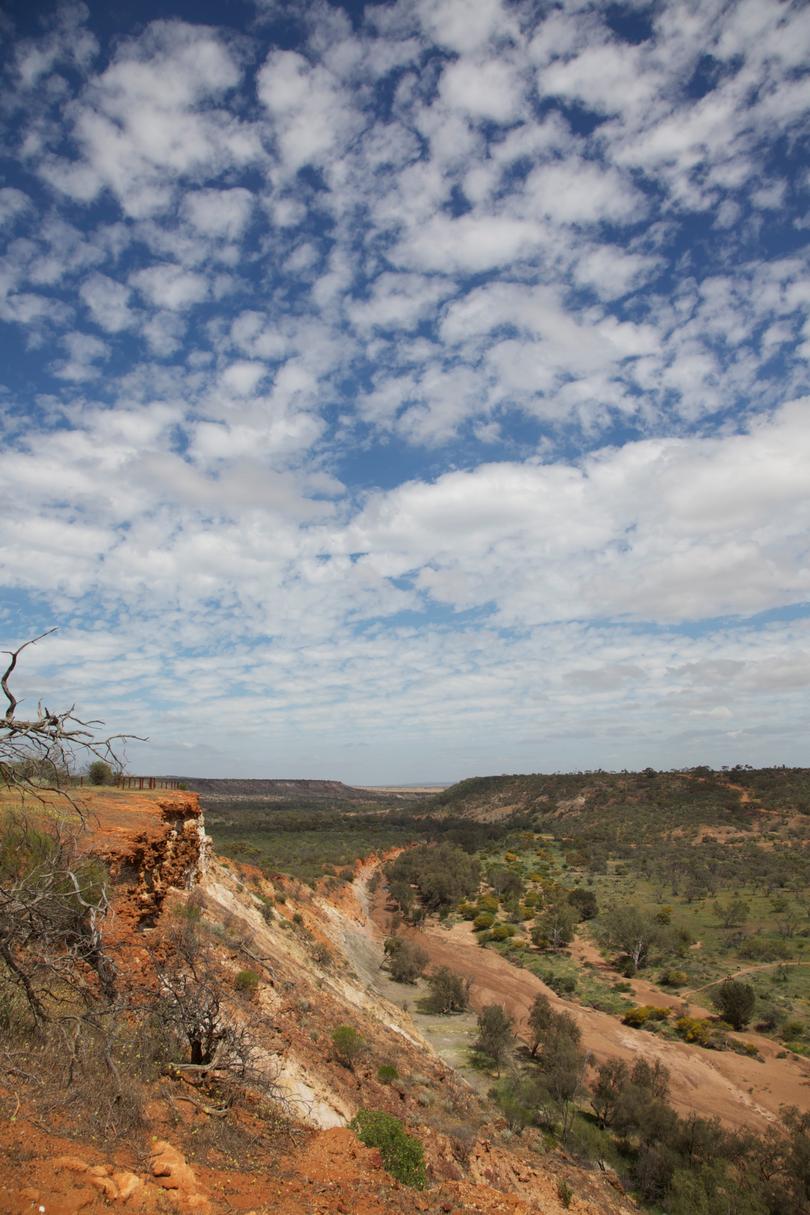 As I have mentioned, Coalseam Conservation Park is just about the most reliable bloomer, in my book. This biodiversity hotspot is just north of Mingenew.

Mullewa isn’t far from Coalseam Conservation Park. I head to Mullewa, and to its east, for carpets of everlastings. But the region also has hundreds of orchids including snail, spider and fairy. And look out for wreath flowers (at Pindar). Good spots in and around Mullewa include Mullewa Bushland Trail and Wildflower Walk and the Mullewa Waterfalls.

Mullewa Visitor Centre will point visitors towards those wreath flowers. 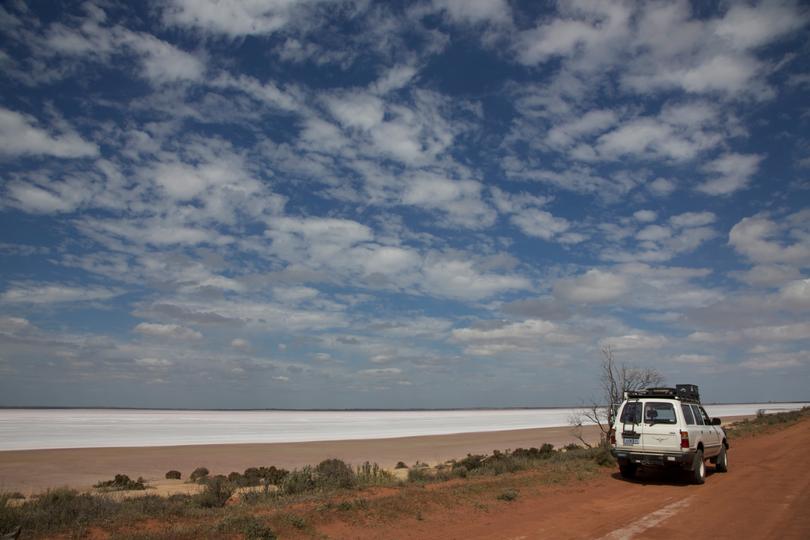 Three Springs Visitor Centre will help with information, but look for wildflowers along the roadsides and railway reserves — from everlastings to myrtles, grevilleas and hakeas.

Dookanooka Nature Reserve on the Eneabba-Three Springs Road is a good spot. Keep your eyes out for purple star flowers and donkey orchids.

There are lots of good wildflower locations across Chapman Valley, from the area around the Naraling Hall (in the north of the region) to the Wandana Nature Reserve north of Yuna.

Wildflower season usually runs from the end of July to September. 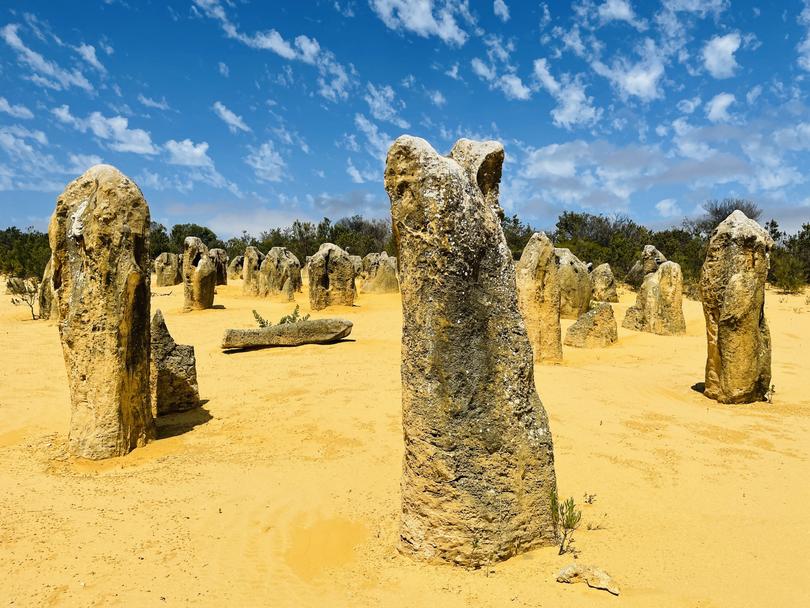 Bindoon to Moora on the 116 (Bindoon-Moora Road) — 92km. Turn on to the Midlands Road, to Coorow, Carnamah, Three Springs and Mingenew — Moora to Mingenew is 195km. At Mingenew, turn right on to the Mingenew-Mullewa Road to Mullewa — Mingenew to Mullewa is 85km. From there, you might drive west to Geraldton — Mullewa to Geraldton is 100km. Head home down the Indian Ocean Drive, or Brand Highway, or through Eneabba.

Head from Perth to Geraldton up the scenic Indian Ocean Drive, past Lancelin — or Brand Highway, through rural landscapes. Either way, stop at Nambung National Park and the Pinnacles Desert. On the road from Geraldton to Kalbarri, stop at Northampton, then take the scenic coastal route past Hutt Lagoon and Pink Lake. To head on to Shark Bay, first drive back out to the highway, then take the World Heritage Drive, past Shell Beach and Hamelin Pool. Stay in Denham or Monkey Mia. From Shark Bay to Carnarvon is about another four hours. Drive on from there to Coral Bay and Exmouth.

Mullewa is about 100km east-northeast of Geraldton, and one of few places in the world where wreath flowers grow . . . but there are also those pink, white and yellow everlastings, of course, and pompoms. But it also has the Church of Our Lady of Mt Carmel and the Holy Apostles St Peter and St Paul and the Priest House — the Monsignor Hawes Priesthouse Museum. They were designed by the famous architect-priest Monsignor John Hawes.

Eneabba sandplain is part of a world-renowned biodiversity hotspot and covered in low scrub and heathland called kwongan. Both Eneabba and Carnamah are “wildflower towns” and about 12km west of Eneabba, Lake Indoon is a large freshwater lake with a camping area. It has gas barbecues, toilets and hot water facilities. Tathra National Park, 25km west of Carnamah on the Carnamah-Eneabba Road, is good to visit at this time of year. About 20km north of Eneabba, and west of Brand Highway, Beekeepers Reserve is small but has a good variety of wildflowers.

Badgingarra National Park has diverse bush and the Iain Wilson Nature Trail is a 3.5km walk which highlights many species of wildflowers, including Badgingarra’s emblem, the black kangaroo paw. The main 2km trail has good views, and a 1.5km detour has a steep climb to a lookout.

Just as we expect those carpets of everlastings inland, the coastal landscape blooms at the same latitudes, of course.

I like to call it the near-north coast — from Cervantes and Jurien Bay up through Leeman and Green Head and Lesueur. The big landmarks near Cerantes are the limestone pillars that are the Pinnacles of Nambung National Park. But I do suggest visitors also walk around nearby Lake Thetis, with its stromatolites, which are living examples of the earliest complex lifeforms on Earth. Some of these stromatolites are thought to be getting on for 3400 years old.

A little further north, at Jurien Bay, one of the draws are the Australian sealions that call this area home. The coast and its islands are remarkable and there’s accommodation in Jurien Bay — a characterful coastal town.

But one of the State’s real gems is Lesueur National Park. It is one of the most important flora conservation reserves in WA. The park has more than 900 species of flora, around 200 of which have special conservation significance. Lesueur Scenic Drive trail takes visitors through the most scenic parts of the park, past Mount Lesueur and Cockleshell Gulley. The park’s good walk trails include the 400m Botanical Path, 2.5km Gairdner Trail and the 4km trail to Mount Lesueur at Drummonds.

Chapman Valley, immediately adjoining the City of Greater Geraldton, has a varied landscape, from flat-top ranges to wildflower reserves and agricultural lands. 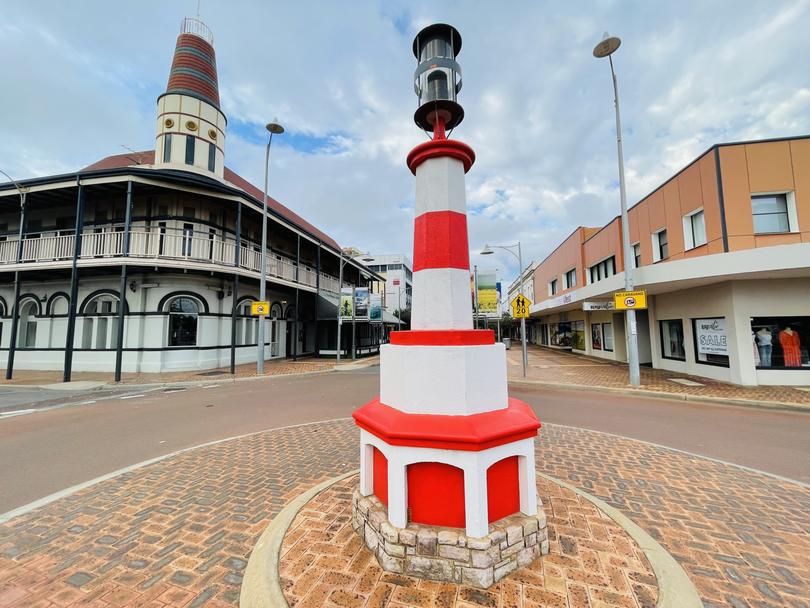 I always think of it as a classic “WA country town by the sea”. Geraldton is a good base or passing point for a wildflower trip and is a half-day drive away from the metro area.

There are more than 1000 plant species in Kalbarri National Park — a flora as diverse as a rainforest. Despite having dramatic gorges and lookouts, most roads are sealed. There are good walk trails. From the carpark at Z Bend, there are a number of walks, including the 1.2km return walk to the Z Bend lookout, 2.6km River Trail and 6km Four Ways Trail. Nature’s Window is just a 1km return walk, with a view of the Murchison River Gorge through the red frame of worn sandstone. Skywalk also gives visitors views of Murchison River Gorge. There are two 100m-high walks at West Loop, projecting 25m and 17m beyond the rim of the gorge.

Carnarvon is between two World Heritage Areas — Shark Bay and Ningaloo Reef — and famous for all sorts of plant life, of course. But just think for a moment. The fact that its climate and geography are well suited to growing excellent fruit and vegetables also means that this region is a hotspot for endemic native flora. And it is a town with plenty of history of all sorts — from its indigenous story to its settler history and its connection to space and technology. The town played a significant role in the manned space program and the Australian communications industry.

Shark Bay is a world heritage site. Apart from wildflowers, there’s Hamelin Pool Marine Nature Reserve, the old 1884 Telegraph Station, Shell Beach and, at the end of the peninsula, Denham and Monkey Mia, famous for its Indo-Pacific bottlenose dolphins.

+ Information, planning and itineraries at australiascoralcoast.com