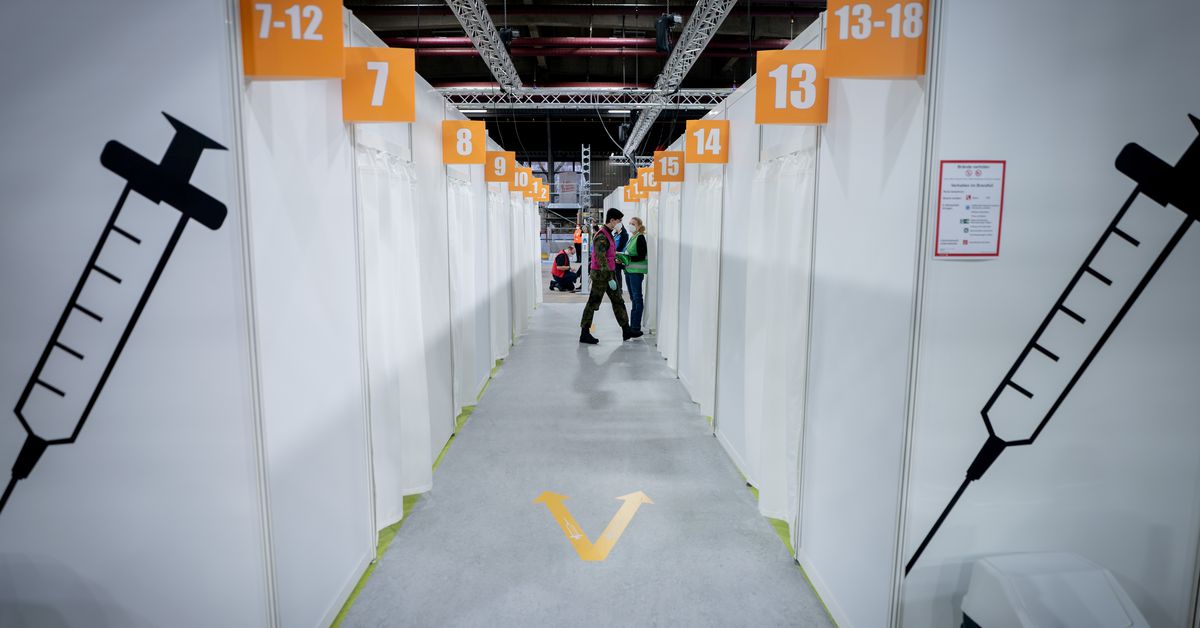 Cabins at a vaccination centre, temporarily set up in the Erika-Hess ice stadium to fight the coronavirus disease (COVID-19) pandemic are seen in Berlin, Germany, January 14, 2021. Kay Nietfeld/Pool via REUTERS

BERLIN, Oct 19 (Reuters) – Germany may miss its target to donate 100 million COVID-19 vaccine doses this year due to conditions imposed by manufacturers and delivery shortfalls, a health ministry official said in a letter to Brussels seen by Reuters.

The 100 million doses account for half of the total promised by European Union member states to poorer countries this year, according to the European Commission.

But on Oct. 19, the foreign office said Germany had only donated just over 17% of that amount.

The letter is the strongest sign yet of the tensions between governments and drugmakers over donations. The EU and rich countries whose most vulnerable citizens have largely already been vaccinated are under heavy pressure from the World Health Organization to help deliver more doses to poorer nations, many of which have inoculated only a fraction of their populations.

“With vaccine surpluses in many member states increasing at present, we will soon be facing a situation of global allocation emergency,” Steffen wrote. “Some countries could be forced to waste large volumes of valuable vaccines urgently needed in other parts of the world.”

Obstacles include minimum sales prices, onerous compensation payments required of the recipient countries and restrictions on distributing to international organisations, he said.

Steffen said AstraZeneca (AZN.L) and Johnson & Johnson (JNJ.N) could together only deliver up to 50 million doses of their COVID-19 vaccines this year, meaning Germany would also have to donate Pfizer/BioNTech (22UAy.DE), (PFE.N) and Moderna (MRNA.O) shots that are the mainstays of its vaccination drive.

In response, Johnson & Johnson said it would help countries with surplus doses to donate them to other countries, especially using the international COVAX facility, as long as the countries meet safety, legal, regulatory and logistical requirements.

The other manufacturers could not be immediately reached for comment.

EU countries have mostly promised to donate AstraZeneca and Johnson & Johnson vaccines. Many have restricted the use of these vaccines due to very rare cases of blood clotting.

Any shortfall in donations is likely to heighten the criticism of richer nations, which are rolling out boosters and inoculating teenagers considered a low-risk from COVID-19, while the pandemic rages elsewhere. read more