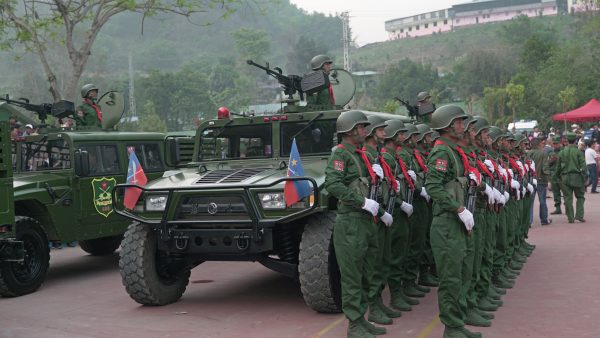 Myanmar’s Wa State is a de facto independent state tightly governed by the United Wa State Party (UWSP). The United Wa State Army (UWSA), the UWSP’s armed wing, comprises more than 30,000 well-equipped and trained troops, making it perhaps the strongest ethnic armed group in the country. This has enabled it to deter the Myanmar military, or Tatmadaw, defeat rival rebel groups such as the Mong Tai Army, and assist friendly forces, mainly members of the Federal Political Negotiation and Consultative Committee under the party’s leadership. But the role of the army is not limited to these goals. For example, it also played an important role in Wa State’s response to the COVID-19 pandemic.

On February 3, 2020, three days after the World Health Organization declared COVID-19 a public health emergency of international concern, the UWSP held a special meeting to determine its response to the novel coronavirus. In this meeting, the party established a Central Leading Group (CLG) to make strategic decisions during the pandemic. The CLG immediately asked each UWSA theater command to set up corresponding working groups and cooperate with local governments to prevent the spread of the virus. Thus, since the beginning, the UWSA was closely involved in the COVID-19 response system. Later, in an official UWSP promotional video for the anti-epidemic campaign, the UWSA was described as the mainstay of winning the fight against COVID-19.

To start with, the five theater commands in Wa State provided local governments with logistical and medical support. During the lockdowns in Pangkham, Mengbo, and Mengneng, army personnel were deployed to disinfect public spaces, and military vehicles were mobilized to deliver epidemic prevention supplies and daily necessities, as well as to provide emergency transportation services. Due to the need to staff a large number of Nucleic Acid Amplification Testing (NAAT) sites, members of the army acted as monitors for the sampling process and helped keep order on-site.

When new policies were issued, the military sometimes took on a propaganda function. For example, before Pangkham’s fourth citywide NAAT, the UWSA formed several offline publicity teams to inform the population of incoming regulations through the use of loudspeakers and going door-to-door. In addition, the pandemic saw an integration of military medical resources into civilian ones across Wa State. The First Theater Command, for instance, sent 48 medical personnel from its 468th Brigade, where it is stationed, to assist overwhelmed hospitals and civilian medical personnel in Mengbo during December 2020 and January 2021.

Get briefed on the story of the week, and developing stories to watch across the Asia-Pacific.


Furthermore, the UWSA was the concrete implementer of many of the control measures introduced during the pandemic. During the period in which Wa State introduced border controls and mobility restrictions, soldiers conducted border surveillance and manned internal checkpoints. If any illegal entrants were detected, the army would send them to the local judicial authorities. Perhaps most surprisingly, the military also took on the role of inspecting workplaces as restrictions were relaxed. In early 2021, the CLG requested each theater command to monitor business sites that had resumed their operations. During the monitoring, they checked whether the business sites followed the required measures, including checking whether their employees were vaccinated and whether the premises were properly ventilated.

Notably, the Fourth Theater Command, also known as the 171st Military Region, based in Wa State’s southern area, not only implemented the decisions of the CLG but also enjoyed the autonomy to formulate its own COVID-19 policies, for which the permission of the party was of course still a prerequisite. This could also be seen as a continuation of the 171st Military Region’s long history of great autonomy and high involvement in government affairs of Wa’s southern territory, which is territorially detached from the main territory bordering China. In the early stages of the pandemic, the Fourth Theater Command was able to request permission for its proposed measures from the CLG and gained approval from Bao Youxiang, the general secretary of the UWSP. Later, the Wa leadership left it directly to the 171st Military Region to develop its pandemic control plans based on local conditions.

As a result, the northern and southern regions of Wa State differed in their efforts to manage the outbreak. On May 25, 2020, the 171st Military Region required 21 days of quarantine in a designated place and then seven days of home quarantine for those returning to southern Wa State. This compared to 14 days in other regions during the same period. Moreover, on June 26, at a time when other areas still restricting large gatherings, the southern region held a significant awareness campaign with over 2,000 people in attendance to mark the International Day against Drug Abuse and Illicit Trafficking.

Needless to say, the fight against COVID-19 was costly. The Wa authorities have actively sought private donations since the onset of the pandemic, and therefore the UWSA, along with other government departments, directly intervened in charitable fundraising. Based on its success in gathering resources, the army did a commendable job. As of January 20, 2021, the First Theater Command had collected cash donations of 2,173,000 RMB (about $310,000), as well as various testing reagents, ventilators, monitors, medicines, protective equipment, and other materials, with a total value of over 26 million RMB (about $3.7 million).

Just one month later, they raised another 1,073,000 RMB ($153,200) in cash and supplies worth approximately 49,475,700 RMB ($7,068,000). Additionally, the CLG granted the military permission to manage and distribute supplies according to their regions’ actual needs. Interestingly, military commanders were also an important source of donations. In the list of donations released by the 3rd Theater Command on February 16, 2021, Bao Yanrong, then commander of the 318th Brigade, and Bao Sanre, the commander of the 618th Brigade, made one-time donations of 4,400,000 RMB ($628,600) and 201,000 RMB ($28,700), respectively. Likewise, Bao Yanbang, then commander-in-chief of the First Theater Command, donated two cars for the disinfection facilities run by the Health Department of Wa State and gave a Polymerase Chain Reaction (PCR) lab worth 2.75 million RMB ($392,900) to Mengbo County to improve the local NAAT capacity.

States can easily deploy military personnel and capabilities to manage crises and disasters. This article arguably shows that one of the ethnic armed organizations in northern Myanmar succeeded in mobilizing its military forces in response to the COVID-19 pandemic in a similar manner to many nation-states. In addition to providing logistical support and carrying out security-related tasks like real national armies, the UWSA was engaged in social affairs management and even fundraising.