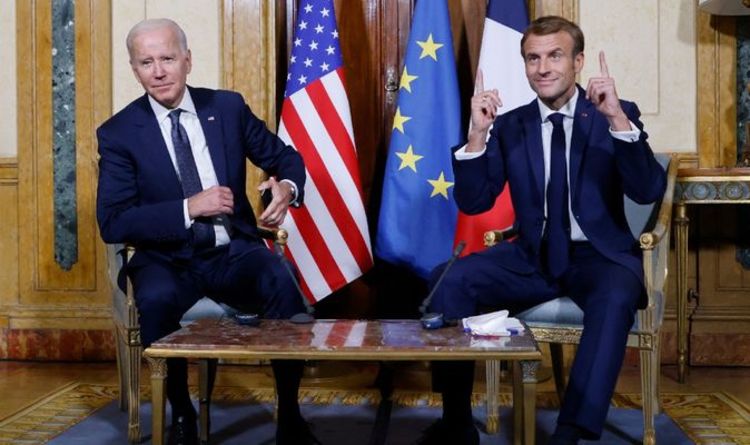 Sky News host Andrew Bolt has slammed Joe Biden as a “weak backstabber” after the US President intervened in the bitter between Australia and France over the cancellation of a lucrative submarine deal. In a recent summit with Emmanuel Macron, Mr Biden told the French leader: “What We did was clumsy, it was not done with a lot of grace. I was under the impression that France had been formed long before that a deal was not going through, I honest to God did not know you had not been that.”

Mr Bolt told Sky News Australia: “Some people say wait, the US President himself says that the [Australian Prime Minster, Scott] Morrison has assaulted France by tearing that subs deal and signing another one with Britain and the US for nuclear subs instead, without giving France a fair warning.”

He added: “Joe Biden, what a weak backstabber he is.

“But why would you trust him? He’s just throwing Australia under the bus to make things easy within with France, you know, not my fault, blame the Aussies.

“But really who could trust Biden any way to remember anything about how the US deal with Australia went down when he couldn’t even remember Morrison’s name when announcing it.”

On September 16 President Biden appeared to forget the name of the Australian Prime Minister Scott Morrison during the joint UK, Australian, and US security conference to announce AUKUS.

He then turned to Mr Morrison and said: “I what to thank…uh…that fella down under.”

“Thank you very much, pal,” added the President.

In Rome for the G20 summit, Mr Macron and Mr Morrison were meeting for first time since Australia scrapped the multi-billion dollar deal with France.

“I don’t think, I know,” Mr Macron said in response to a question whether he thought that Morrison had lied to him.