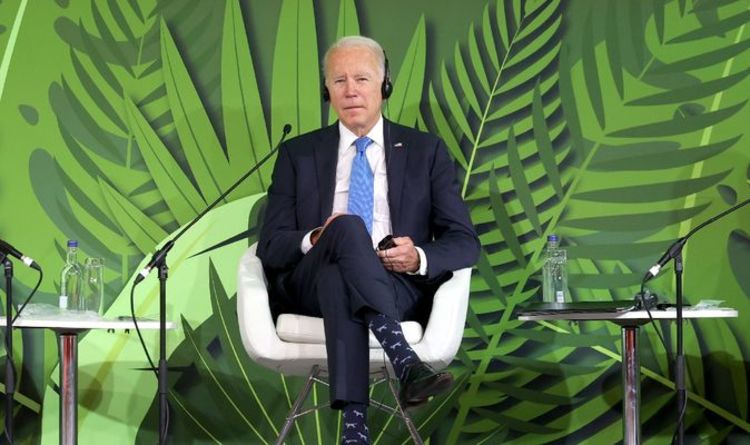 Former Brexit Party leader has slapped down the President of the United States over the US withdrawal from Afghanistan. Nigel Farage has argued on Fox News that the decision by President Biden to pull troops out of Afghanistan without consulting American’s allies had greatly damaged the US’s reputation. He added that the Afghanistan fiasco was now undermining attempts by Joe Biden to push leaders to adopt a global climate agenda at COP26.

Mr Farage said: “The truth of it is that ever since the Afghanistan withdrawal done without any consultation with your long-term allies, America’s reputation is frankly down the tubes.

“And I think Biden looks, posturing, ineffectual, and I’m sure Boris Johnson, who’s chairing this is pleased that Biden’s there because he’s gone absolutely crazy on this green agenda.

“But frankly, most people seeing this will know what is the point of us closing down industries putting up everyone’s fuel bills at home.

“If India, China, and Russia aren’t going to play the game.”

It comes as climate activist Greta Thunberg addressed a crowd of hundreds in a Glasgow park on the first day of the climate summit.

Ms Thunberg told the climate protestors global leaders were not doing enough to combat climate change before launching into the tongue-in-check singalong.

She told the crowd: ”This COP26 is just like the previous ones. It is leading us nowhere.

“Inside COP26 politicians and people in power are pretending to take our future seriously but they are lying.

Explaining the clip, the teenage campaigner simply put: “When in Scotland…”

Mr Biden meanwhile has told the Cop26 climate summit in Glasgow: “Together we are committing to collectively reduce our methane by 30% by 2030, and I think we could probably go beyond that.”

He added: “Today it’s approaching 100 countries that are signing on. That’s nearly half the global methane emissions… It’s going to make a huge difference.”