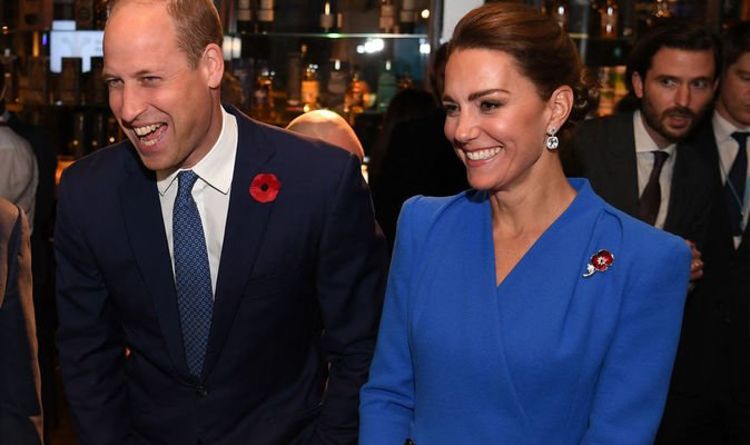 The Duchess of Cambridge was pictured wearing a blue floor-length gown, while Prince William wore a navy suit. The pair hosted a reception for key members of the Sustainable Markets Initiative and the Winners and Finalists of the first Earthshot Prize Awards – Prince William’s £50million climate change initiative.

The event took place on the sidelines of the COP26 UN Climate Change Conference in Glasgow.

The Duke and Duchess of Cambridge are holding a prominent position at the summit after the Queen was forced to pull out due to health issues.

Earlier in the day, the Duke and Duchess of Cambridge met with scouts at Alexandra Sports hub in Dennistoun as part of their activities to support the summit.

The couple met with the young Scouts to talk about the movement’s PromiseToThePlanet campaign.

Ahead of his arrival in Glasgow, the Duke of Cambridge wrote on Twitter: “#COP26 is a landmark moment for the future of our planet — I’m proud that our @EarthshotPrize Finalists will be joining me in Glasgow to show the world that there is reason to be optimistic.

“I’m hopeful about what can be achieved. W”

Prince Charles, as the most senior royal in attendance, is also holding a very prominent position at the summit.

The heir to the throne gave an address at the COP26 opening ceremony, calling on world leaders to put themselves on a “war-like footing” to combat climate change.

“But what they do for the people of tomorrow — that is statesmanship.

“I, for one, hope that this conference will be one of those rare occasions where everyone will have the chance to rise above the politics of the moment and achieve true statesmanship.”

“It is the hope of many that the legacy of this summit – written in history books yet to be printed – will describe you as the leaders who did not pass up the opportunity; and that you answered the call of those future generations.”

She also spoke about her late husband Prince Philip’s climate activism, saying how she felt “proud” that her two sons had continued to support the cause.

She said: “This is a duty I am especially happy to discharge, as the impact of the environment on human progress was a subject close to the heart of my dear late husband, Prince Philip, The Duke of Edinburgh.

“It is a source of great pride to me that the leading role my husband played in encouraging people to protect our fragile planet, lives on through the work of our eldest son Charles and his eldest son William.

“I could not be more proud of them.”

The Queen decided against attending the summit, after receiving medical advice to rest for a few days instead.

This followed the cancellation of her trip to Northern Ireland and an overnight stay in hospital – her first in more than eight years.