The real-life horrors of the gay conversion therapy movement are about to get the slasher film treatment.

Peacock released a teaser on Wednesday for “They/Them,” out Aug. 5. Written and directed by John Logan, the film follows a group of LGBTQ teens sent to Camp Whistler, an institution that promises to “cure” visitors of their same-sex attraction or their transgender and gender-nonconforming identities.

The teaser also introduces viewers to Owen Whistler (played by Kevin Bacon), the camp’s director who promises “a safe space for everyone” in spite of the menacing presence of his wife, Cora (Carrie Preston) and medic, Molly (Anna Chlumsky).

However, not everything at Camp Whistler is as it appears, and the campers soon find themselves targeted by a masked killer.

Catch the trailer for “They/Them” below.

Bacon certainly has horror movie pedigree, having starred in 1980’s “Friday the 13th.” Elements of “They/Them” appear to have been inspired by that franchise.

The medically denounced practice of conversion therapy, euphemistically called reparative therapy by its proponents, has been depicted in the Hollywood movies “Boy Erased” and “The Miseducation of Cameron Post.” Still, viewers may be divided on whether such a controversial subject is suitable turf for a slasher film in 2022, especially as the U.S. is experiencing a troubling surge in anti-LGBTQ legislation. 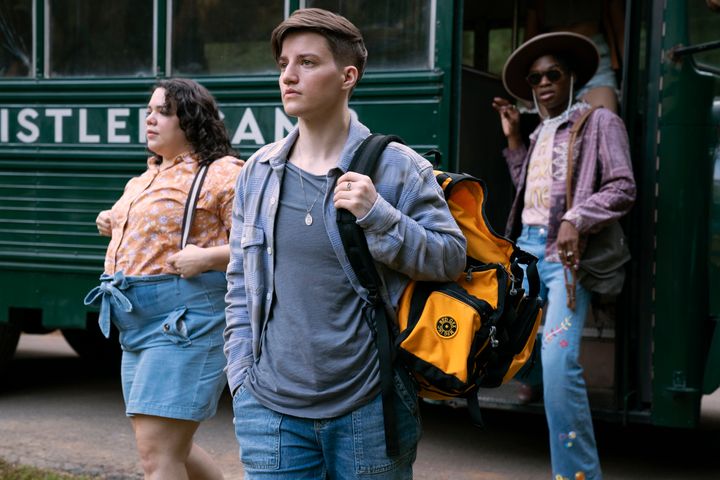 “I wanted to make a movie that celebrates queerness, with characters that I never saw when I was growing up,” director and screenwriter John Logan said.

But Logan, whose screenwriting credits include “The Aviator” and “Gladiator,” believes “They/Them” is, ultimately, a celebration of LGBTQ identity.

“I’ve loved horror movies as long as I can remember, I think because monsters represent ‘the other’ and as a gay kid, I felt a powerful sense of kinship with those characters who were different, outlawed, or forbidden,” he told Indiewire. “I wanted to make a movie that celebrates queerness, with characters that I never saw when I was growing up.”

“When people walk away from the movie, I hope they’re going to remember the incredible love that these kids have for each other and how that love needs to be protected and celebrated,” he added.