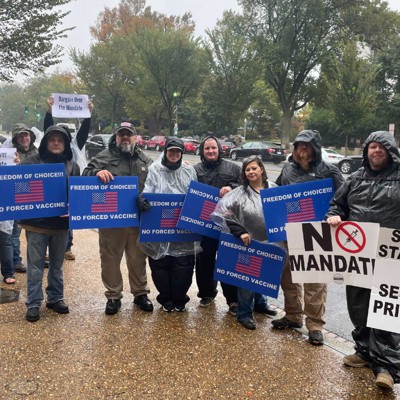 American Federation of Government Employees Local 501, which represents federal prisons employees in Miami, and Council of Prison Locals 33, the division of AFGE that represents Federal Bureau of Prisons employees nationwide, filed the lawsuit in the U.S. District Court for the Southern District of Florida. President Biden issued a vaccine mandate for federal employees on September 9 and the deadline to complete vaccination is November 22. The Bureau of Prisons was hit particularly hard by the pandemic: 155 federal inmates and 369 staff members had confirmed cases; 42,776 inmates and 8,169 staff had recovered; and there had been 266 inmate (10 of which were on home confinement) and seven staff deaths as of Saturday morning, according to the bureau’s data.

The plaintiffs are “challenging the defendants’ acts, personnel policies, customs and workplace procedures, which deprived plaintiffs of their due process rights under the Fourteenth Amendment to the United States Constitution as well as their Fourteenth Amendment liberty right to privacy, self-autonomy and personal identity, including the right to reject mandated procedures and treatment,” said the complaint. Also, the defendants have “failed to follow the notice and comment provisions of the Administrative Procedures Act” and the mandate “is clearly arbitrary and capricious violating the Equal Protection Clause of the Fourteenth Amendment…since corrections officers/bargaining unit employees and members of the putative class are subject to the vaccine mandate; however, prison inmates are not.”

Under one of the counts, the complaint says the plaintiffs are asking the court to “declare that the defendant violated the Administrative Procedures Act and further order preliminary injunctive relief as well as permanent injunctive relief; the entry of a finding by the court invalidating the vaccine mandate for federal employees…[and] grant such other relief as the court may deem to be just and proper.”

Government Executive reached out to the Bureau of Prisons, the Justice Department and White House for comment, but they did not respond immediately.

At the national level, AFGE, which represents about 700,000 federal and D.C. government workers, previously said “a direct legal challenge or lawsuit over the order is unavailable,” following an exhaustive review.

Several other lawsuits challenging the vaccine mandate for federal employees (including the military) have been filed––as The Washington Post, Washington Examiner and Fox News have reported–– but this is the first by a federal employee union.

In regard to one case, a district court judge in D.C. issued an order Thursday “asking the Biden administration to agree that both civilian and active-duty military plaintiffs will not be terminated while they await a ruling after they sued the administration over religious exemptions to COVID-19 vaccines,” Fox News reported. “The Biden administration, which had until noon on Friday to respond, said in a filing that it would not agree to halt the discipline and termination of any employees in the process of seeking a religious exemption to the vaccine pending the court’s ruling on the temporary restraining order motion.”

Government Executive reported earlier this month about how some Bureau of Prisons employees are against the vaccine mandate for various reasons and some are considering resigning or retiring early as a result. The union said it is concerned that a possible exodus of staff members due to the mandate could exacerbate the current staffing problem.

On Friday, the prisons bureau union had pickets across the country to shed light on the agency’s staffing crisis as well as call for collective bargaining over the vaccine mandate.

“We don’t necessarily agree with the mandate. We’re not anti-vaccine, we’re just anti-mandate,” Brandy Moore, national union secretary treasurer for Council of Prison Locals C-33, told Government Executive at the picket outside the Justice Department in Washington, D.C. Other concerns she listed were: inmates are not being forced to get vaccinated, discipline for non-compliance with the mandate “is already predetermined” and Bureau of Prisons employees have not been approved for hazard pay for the pandemic yet, while Public Health Service workers, who work in the prisons, have.

About a month ago the Bureau of Prisons workforce was about 52% vaccinated and “I know a handful of people since then have been vaccinated” and “a lot of people have submitted accommodation requests, religious or medical,” Moore said. She added that, “We’ve been screaming we’re understaffed since 2016…and we feel like this mandate is going to exacerbate that.”

During a Senate Judiciary Committee hearing on Wednesday, Attorney General Garland was asked about a Government Accountability Office report issued in February that said the prisons bureau should develop more reliable and consistent methods of using workforce data to help with hiring and retention as well as improve employee well-being,

Garland agreed this is “a serious problem” and said the deputy attorney general has had repeated meetings with Bureau of Prisons officials to go over staffing and assessment of staffing.

“BOP staff are our most valued resource,” BOP Director Michael Carvajal said in a memo to all staff on September 29, obtained by Government Executive, about implementation of the mandate. “Meeting this vaccination requirement is vital to keeping our staff, families, co-workers and inmate population safe.” He reiterated the guidance from the Safer Federal Workforce Task Force that those who do not comply with the mandate and don’t have a legal exemption will be subject to discipline, which is “up to and including removal from federal service.”

On September 9, Biden also issued a vaccine mandate for employees of federal contractors and announced a forthcoming rule that will require businesses with 100 or more employees to get vaccinated or submit to regular coronavirus testing.

At least 20 states have filed lawsuits challenging the contractor mandate, the Associated Press reported on Saturday. There has also been much opposition to the forthcoming Occupational Safety and Health Administration rule, although the exact timing of its release is unclear.