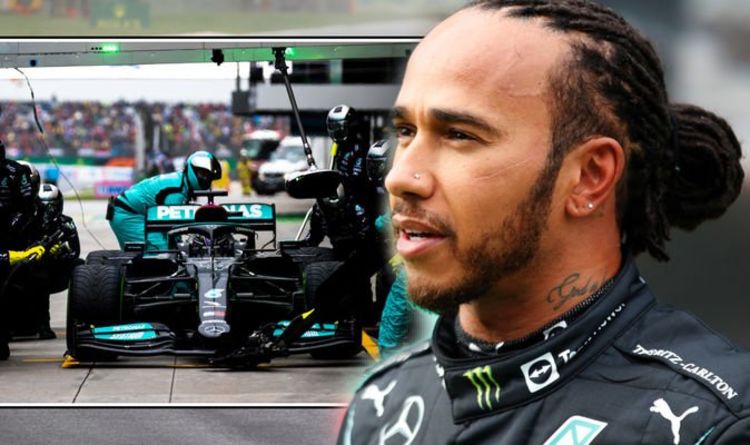 Lewis Hamilton was left frustrated during the Turkish Grand Prix after Mercedes made a strategy call which saw the seven-time world champion drop from third to fifth in the latter moments of the race, but admitted in “hindsight” he would’ve made a different decision.

Mercedes and Hamilton faced a tough call during the race, missing the key opportunity to pit their driver after the 36-year-old ignored the team’s call to come in for a new set of tyres.

With changing conditions, Hamilton felt the tyres he started on could get him to the end of the race, with his engineer Peter Bonnington asking the Mercedes driver to pit.

“I’m going to stay out,” was the response from Hamilton, before realising he was losing grip quickly.

Eventually, in third place with seven laps remaining, Hamilton dove into the pits for a new set of intermediates, remerging in fifth place.

But the seven-time world champion was furious on the radio stating: “We shouldn’t have come in. Massive graining man. I told you.”

“The tyres are bald so you don’t know how far they’re going to go and so there is definitely the worry of the life of the tyre but also I wasn’t really that fussed at the end there,” Hamilton told Sky Sports F1.

“I was struggling, had low grip, I’m not really sure why. But then all of a sudden I would have not bad pace.

“So I was losing performance to the guys behind but I think probably in hindsight I should have either stayed out or come in much earlier because when you come in with eight laps to go, you don’t have time to go through the graining phase of that medium tyre on a drying track.

“So then I went through this whole sliding phase where I nearly lost more positions so a bit frustrating but it is what it is.

“It felt good to be in third and I thought if I could just hold on to this, it’s a great result from 11th. Fifth is worse, but it could be worse.”

When pushed if he believed the tyres would’ve lasted, Hamilton responded “Ocon’s did,” with the Alpine driver finishing 10th.

“I didn’t know at that time but I could have probably assumed that I would lose [places],” Hamilton added.

“The guys were only 15 seconds behind and it’s a 24-second pit stop, so I knew I would lose perhaps one.”

Shortly after complaining about graining, Bonnington was heard giving Hamilton an update on Alpha Tauri’s Pierre Gasly, who was in his rearview mirror in sixth place.

“Leave it alone man,” Hamilton said, who crossed the line in fifth, with Red Bull’s Max Verstappen taking a six-point lead in the driver standings.

The race was eventually won by Hamilton’s team-mate Valtteri Bottas who started on pole position, with Verstappen finishing second, retaking the lead of the world championship title.

Formula One resumes in two weeks’ time for the USA Grand Prix with just six races remaining in the 2021 Formula One World Champion.