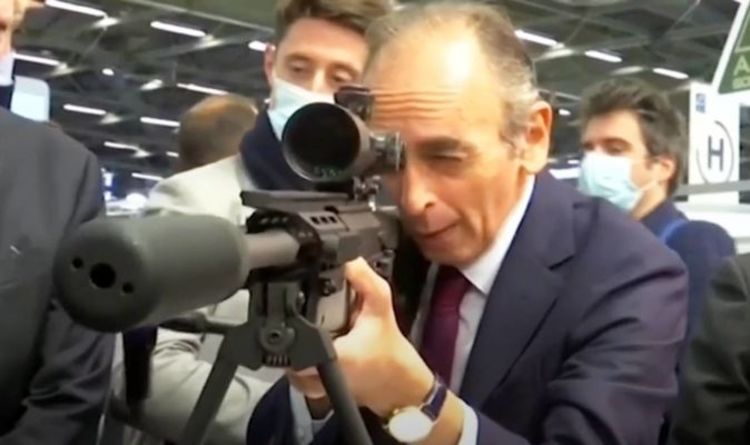 Eric Zemmour, who has been touted to be the next rival of Emmanuel Macron, caused controversy after he aimed a gun towards journalists while he was at a gun fair. Pro-gun Mr Zemmour has previously argued for arming the French public and has won over voters for his far-right, anti-media stance. But the clip caused outrage in France with French ministers condemning the video and with Mr Zemmour then tweeting a picture of the Queen holding a rifle in response.

Footage this week showed Mr Zemmour at an arms fair where he looked down the scope of an unloaded rifle and handled the weapon.

Mr Zemmour was surrounded by reporters and swerved to aim the gun at a group of journalists, saying “Push off, back off.”

The far-right journalist, dubbed “French Trump”, has been a staunch critic of the media and argues it holds too much power in France.

After the video went viral, French ministers condemned the move with Citizenship Minister Marlène Schiappa tweeting out her disgust.

She posted online: “Aiming at journalists with a weapon and telling them to “back off!” Is not funny.

“It is horrifying. Especially after having seriously said that he wanted to “reduce the power of the media”. In a democracy, press freedom is no joke and should never be threatened.”

Mr Zemmour responded by calling her an “imbecile” as many more piled on the potential presidential candidate.

Bizarrely, however, Mr Zemmour then tweeted an image of the Queen holding a rifle nearly 30 years ago with a love heart emoji.

Ms Le Pen had been a staunch opponent of the European Union but after her defeat in 2017 she has sought to distance herself from her party’s extremist past to win over moderate voters.

Similarly, Mr Macron has attempted to win over right-wing voters by defending teachers and others for being critical about Islam.

Politico also believes Mr Macron will win the second round 56 percent to 44 percent if squared off against Ms Le Pen but there is still plenty of time for Mr Zemmour to gain ground if he wishes to do so.