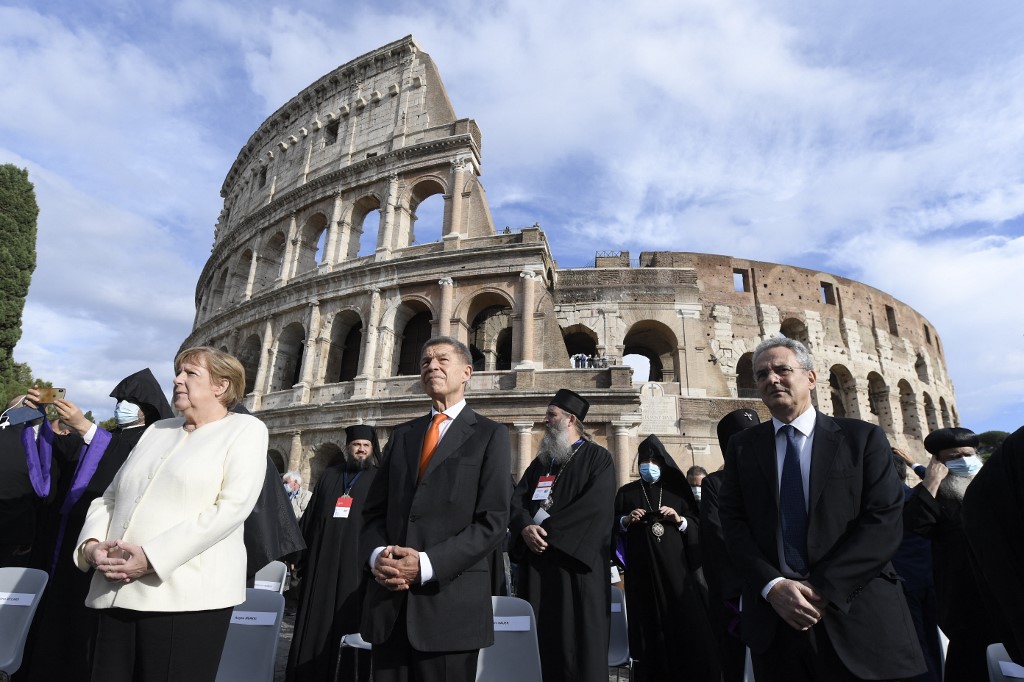 This photo taken on October 7, 2021 by the Vatican media shows German chancellor Angela Merkel (left) and her husband Joachim Sauer (second left) attending a Prayer and Meeting for Peace, by the Colosseum monument in Rome. — Vatican Media / AFP pic

JERUSALEM, Oct 9 — Germany’s outgoing Chancellor Angela Merkel is visiting Israel on a farewell tour today, after a 16-year term during which she cultivated warm relations with the Jewish state.

Prime Minister Naftali Bennett has said he and Merkel would discuss “regional threats and challenges, especially the Iranian nuclear issue”, and maintaining Israel’s “strength in all spheres”.

It is Merkel’s eighth and final visit to Israel as chancellor, as she prepares to retire from politics.

Merkel had initially planned to visit in August, but delayed her trip amid the chaotic exit of US and allied forces, including Germans, from Afghanistan.

The 67-year-old trained physicist is to receive an honorary doctorate from Haifa’s Technion — Israel Institute of Technology.

The veteran of German politics will be the guest of the recently sworn-in Bennett, who ended Benjamin Netanyahu’s 12 straight years as premier.

Merkel congratulated Bennett on taking office in June, saying Germany and Israel were “connected by a unique friendship that we want to strengthen further”.

Merkel’s administration advocated for a two-state solution to the Israeli-Palestinian conflict.

But she stressed Israel’s security as a crucial priority of German foreign policy.

Germany and Israel forged strong diplomatic ties in the decades after World War II, with Berlin committed to the preservation of the Jewish state in penance for the Holocaust.

In 2008, Merkel stood before the Israeli parliament to atone on behalf of the German people in a historic address.

Her administration backed Israel’s “right to defend itself” in May, as Israel bombed Gaza in response to rockets fired by militants from the blockaded enclave.

Thirteen people in Israel died including a soldier, according to the Israeli police and army.

Advocates for the Palestinians have urged Germany to demand an end to Israel’s occupation of the West Bank and Gaza Strip that began in 1967.

More than 600,000 Israeli settlers have moved into the West Bank and east Jerusalem, which Palestinians hope will become part of a future state.

Israel has maintained a blockade on Gaza’s two million residents since the Islamist movement Hamas seized control in 2007.

“Maintaining this fiction has allowed the Merkel government to avoid dealing with the reality of apartheid and persecution of millions of Palestinians,” he said in a statement.

“The new German government should put human rights at the centre of its Israel and Palestine policy,” he added.

A rare point of difference between Germany and Israel is a 2015 deal that Berlin signed to lift sanctions on Iran in exchange for greater supervision of its nuclear programme.

Israel is opposed to efforts by Germany, the United States and other signatories to revive the deal after then US president Donald Trump withdrew from it in 2018. — AFP