The 29-year-old Marsh, who made his T20 debut almost 10 years to the day against South Africa, has been in and out of the Australian side across all three formats ever since as he battled with a number of low-scoring outings at the crease.

However, a stunning knock of 111 for West Australia in the Marsh Cup in late September, as well as being one of the few shining lights on an otherwise dismal tour of Australia in the West Indies and Bangladesh, has Marsh poised to make a real difference with the bat when the tournament commences.

With the stage set for Marsh to put his name in lights, Agar couldn’t be more pleased for his West Australian teammate and believes his recent displays in training should serve as a glimpse of what’s to come.

“I’m just so happy for Mitch, to be honest,” Agar said. “He’s copped a hell of a lot over his career, and a lot of it is pretty unwarranted, I think.

“Yeah, he’s had some low scores here and there, like everyone does in their career, especially when you start at quite a young age.

“He’s handled that incredibly well, to just keep coming back. I think that’s been his greatest strength; he always comes back.

“But now, he’s batting like I’ve never seen someone bat before. First ball in the nets, he’s crunching it for six, no matter who’s bowling at him.

“He played with great responsibility, poise and also aggression in the West Indies and Bangladesh on surfaces that were really hard to score runs on.”

Going into the T20 World Cup, Marsh declined to participate in the IPL and line his pockets. 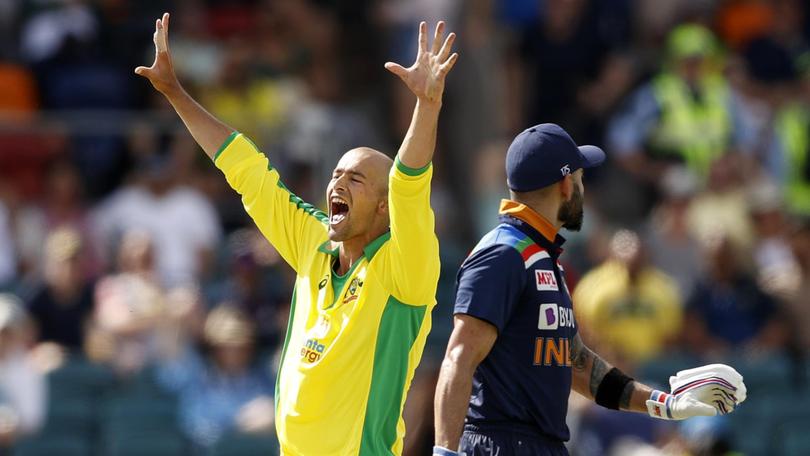 Instead, he spent a number of weeks on Australian shores playing domestic cricket and becoming engaged to his partner.

The time spent back home could prove to be the best preparation Marsh could have ever had, and according to Agar, his teammate’s recent run of form couldn’t have come at a better time.

“For Mitch, what I see in him is a person who’s just really comfortable with who they are,” Agar said.

“He owns who he is, we love him for who he is, and he’s just going out there, like I said before, with an openness and he’s ready to take on whatever’s in front of him.

“I’m excited for him, and I think he’s hitting his straps at the right time.”