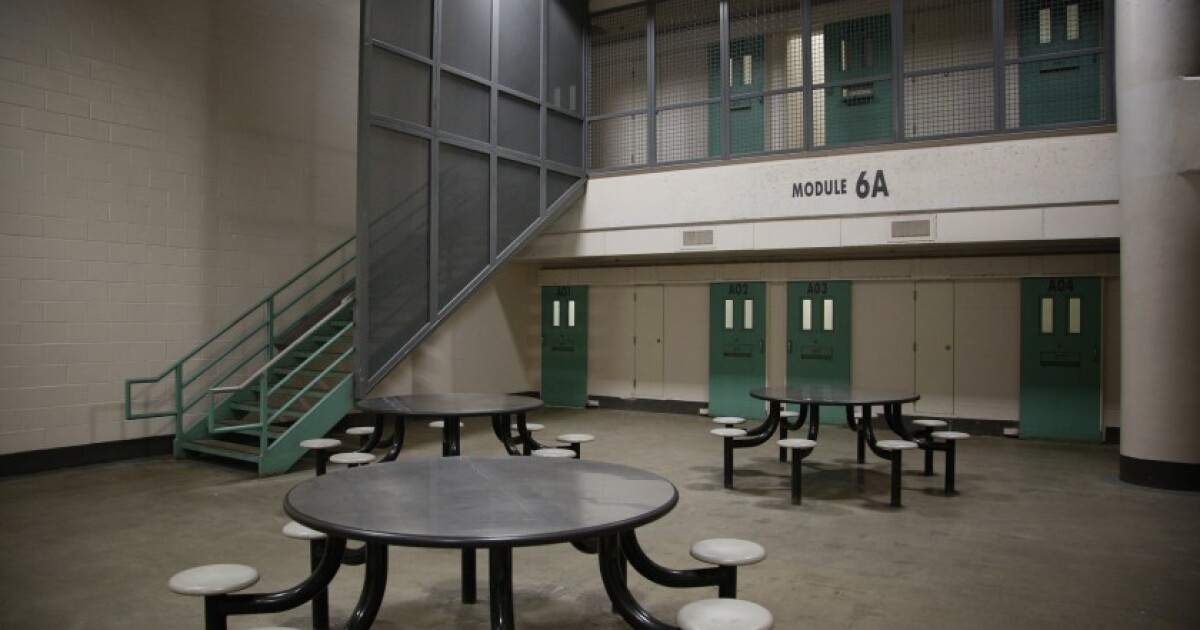 Officials at the San Diego Sheriff’s Department continue to struggle with COVID-19 infections running through the county jails, sickening inmates and deputies alike.

According to data posted on the Sheriff’s Department website Friday, more than five dozen active cases have been reported among staff and detainees.

The department said 39 inmates are now sick with COVID-19 — up from 28 last Tuesday — just under 1 percent of the jail population of 4,100. Among staff, 23 people have active coronavirus infections, sheriff’s officials said.

All but one of the inmates who are sick are housed at the San Diego Central Jail. One inmate at the George Bailey Detention Facility in Otay Mesa is sick.

“The majority of these persons are either asymptomatic or experiencing mild, flu-like symptoms,” wrote department spokeswoman Lt. Amber Baggs in an email.

No one from the Central Jail has been hospitalized since Oct. 11, she said. However, one inmate at George Bailey was hospitalized for other health reasons and subsequently tested positive for COVID-19, Baggs said.

“This individual remains hospitalized,” she said.

The outbreak at the Central Jail is the latest in a series of infections to strike the county’s lockups. Congregate-living facilities like jails, hospitals and senior-living homes are among the most vulnerable spaces for the virus to spread.

Sheriff Bill Gore has implemented a series of protocols aimed at reducing the spread of the disease, but inmates have repeatedly told The San Diego Union-Tribune that those rules are followed sporadically and violators face few repercussions.

To date, the department has reported 1,815 infections in its inmate population since the pandemic was declared in March 2020.

So far, two people in San Diego County custody have died from the virus. The family of a third inmate, Mark Armendo, filed a federal lawsuit alleging that he died in June 2020 after contracting COVID-19 at the Vista jail, but the county disputes that assertion.

Over the same period, 869 sheriff’s employees contracted the disease and two did not survive.

The cases continue even though the department has reduced the jail population by about 25 percent from a high of about 5,500 people before the start of the pandemic.

Despite efforts to keep the jail population down, such as reducing bail to $0 for certain low-level offenses, the latest data show that the current population at George Bailey — the county’s most populous lock-up — exceeds its designed capacity.

The facility held 1,417 people on Oct. 26, the most recent date for which information was available, the department said. It has a rated capacity of 1,380, sheriff’s records show.

The George Bailey jail also has the highest historical COVID-19 caseload, with 709 infections through Oct. 23. The Central Jail has seen 431 people infected and the Vista Detention Facility recorded 214 cases.

A former inmate named Terry Jones sued Gore earlier this year, asking a judge to force the sheriff to either vaccinate enough inmates to slow the spread of COVID-19 or reduce the jail population to allow for social distancing.

The class-action case, which was filed by the ACLU and two other law firms, survived the county’s request for a dismissal this summer. A trial is scheduled for next year.