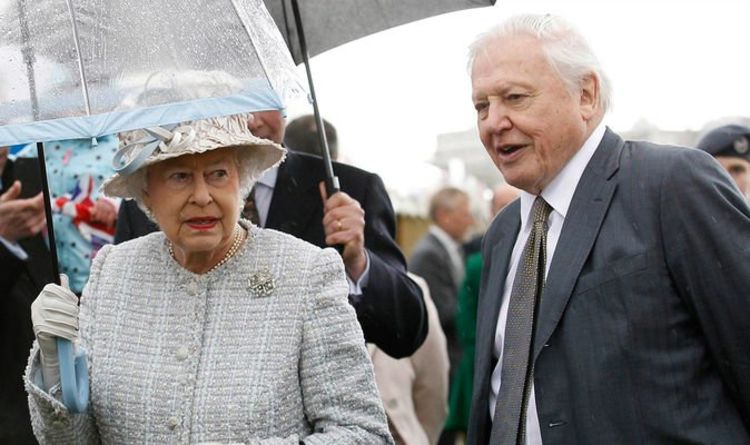 Sir David Attenborough will be back on our screens this evening as he stars in The Mating Game on BBC One. The show is a five-part series exploring a challenge faced by “almost all animals on Earth – the need to attract a partner”. Considering the likes of lions, rhinos and elephants do not have their own Love Island to go on, they have it even harder than we do. Speaking in the latest issue of Radio Times, Sir David revealed the series will feature things that have “never been seen on television before and which are undoubtedly some of the highlights of natural history spectacles”.

He said: “Using drone footage to see this assembly of humpback whales from the air and get that aerial sight of this great assembly of whales is ravishingly beautiful.”

Sir David is well known for his nature programmes, making him a national treasure.

He has also grown a close relationship with another treasured Briton – the Queen.

However, Sir David was reportedly told off by the Queen during filming for a broadcast after he suggested she change costume.

The naturalist was claimed to have suggested the outfit change because the one she was wearing clashed with the background of the shot.

According to reports in 2018 from the Radio Times, the Queen replied: “There is no pleasing you people from the media.

He also spoke about the incident in an interview with the magazine.

Sir David explained: “I picked out something that was mushroom [coloured] and we were waiting for the Queen in the East block where her apartments were and the Queen came out of this rackety old lift and she said: ‘I hope you approve of my costume’.”

The Queen and Sir David get on well though – they went on to create a new series called The Queen’s Green Planet.

Sir David told the Radio Times that he was nervous about the project however.

He said: “Yes, there was a certain amount of apprehension because all sorts of things could have gone wrong.

READ MORE: David Attenborough felt BBC had ‘too many’ cookery and gardening shows

According to reports, Sir David’s appreciation for the Queen can be traced way back to 1963.

At the time, he was working as a controller at the BBC, and had become “extremely upset” after the corporation aired the controversial documentary The Royal Family.

The film, which only aired once in 1969 and was later pulled by the Queen, was the first time the royals had allowed cameras into their day to day life.

Royal biographer Ingrid Seward said Sir David was so concerned about the film going out he told the BBC “You’re killing the monarchy, you know, with this film you’re making.”

The Telegraph reports that he went as far as writing an official objecting to the film.

In it, he said: “The whole institution depends on ­mystique and the tribal chief in his hut.