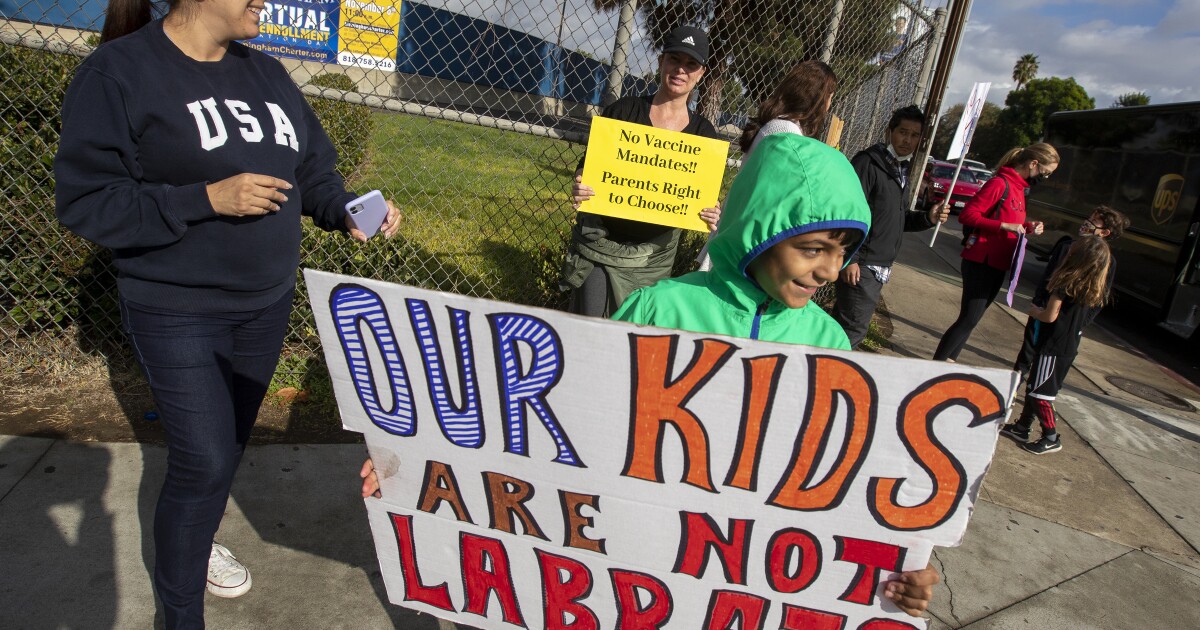 Groups of parents and children kept out of school in protest lined the sidewalk outside Birmingham High School in Lake Balboa on Monday, part of statewide demonstrations against California’s mandate requiring all K-12 students to get vaccinated against COVID-19.

Parents, children and some school district employees held signs including “Our kids are not lab rats” and “Our children our choice.” Similar scenes played out in Huntington Beach and Sacramento, where the state Capitol protest appeared to be the largest.

On Oct. 1, Gov. Gavin Newsom announced a statewide vaccination mandate for all public and private K-12 students, the first of its kind in the nation. Students in seventh through 12th grade would be among the first to be required to get vaccinated under the mandate, starting with the term following full approval of the vaccine from the U.S. Food and Drug Administration. Students younger than 12 would later be phased in.

The announcement has sparked anger among some parents, including those who do not consider themselves anti-vaccine but are opposed to their children being immunized with the available COVID-19 vaccines.

The student vaccination mandate has large support among parents and educators. United Teachers Los Angeles, which represents more than 30,000 teachers, nurses, counselors and librarians, has endorsed a mandate for employees and students.

In Sacramento, people crowded onto the steps of the Capitol after two Californians organized the protest, according to the Sacramento Bee. One parent said she plans to home-school her children rather than have them get vaccinated.

The scattered protests fell on the same day as a COVID-19 vaccine mandate kicked in for employees of the Los Angeles Unified School District. As of Monday, no district employee could remain at a school without having received at least one vaccine dose.

Nery Paiz, head of Associated Administrators of Los Angeles, the administrators union, spoke proudly of a compliance rate of 99.4% among his 3,000 members.

Classroom teachers were at 99% Monday. Members of the union that represents most of the district’s lower-salaried workers — including teaching assistants, after-school and campus aides, bus drivers, custodians and food service workers — were at 95% compliance late Monday, according to the school district.

“We continue in negotiations with LAUSD regarding their staffing plans and the impact this will have on student services and the workers who deliver them,” said Max Arias, executive director of Local 99 of Service Employees International Union. “The district must leave the doors open for workers who have not yet received the vaccine. By pushing for termination, the district is taking a punitive approach that will deny workers reemployment rights.”

Those prepared to sacrifice their job include Christopher Adams, an assistant transportation supervisor for school buses, who declined to be vaccinated. He said Friday was his last day at work after nearly three decades with the district. He joined the protest outside Birmingham High and hopes LAUSD will change course.

The 49-year-old said that during the pandemic, he and his team were responsible for transporting coronavirus tests for the district.

He said he does not know what’s next for him.

“We were putting our lives at risk, and for L.A. Unified to basically turn their backs on us to say, ‘We don’t care,’ is again a slap in the face,” Adams said.