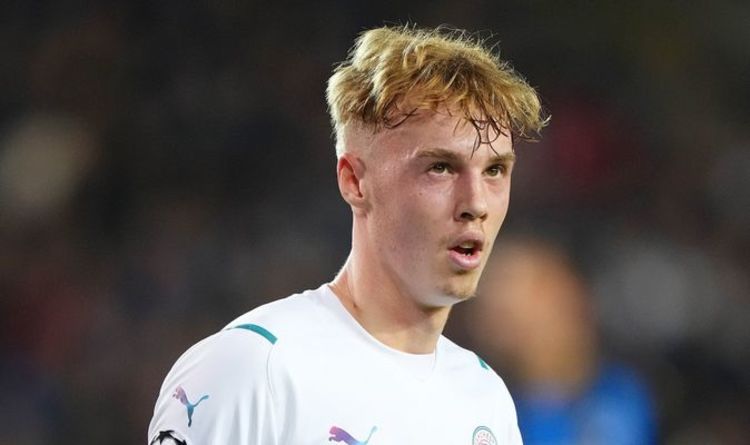 Pep Guardiola wanted ‘a little better’ from Cole Palmer against Club Brugge on Tuesday, despite the starlet netting his first Champions League goal. Palmer scored off the bench in the second half to contribute to Manchester City’s 5-1 rout at the Jan Breydel Stadium.

Man City ran riot at Brugge to move to the top of Group A, leapfrogging the Belgian club and Paris Saint-Germain.

Joao Cancelo opened the scoring on the half-hour mark before Riyad Mahrez netted a penalty on the brink of half-time.

Kyle Walker made it three in the 53rd minute, and then after replacing Kevin De Bruyne, it took Palmer two minutes to add a fourth.

Hans Vanaken pulled one back for the hosts, but Mahrez quickly responded with his second of the night.

In his post-match press conference, Guardiola labelled Palmer ‘special’, but claimed his performance had its flaws.

He said: “Cole [Palmer] has a special quality in front of the box, a talent that is difficult to find. When he has the ball there, most of the time, it ends up in the net.

“It’s difficult to find that. I know how it works with young players. We have to be calm and patient.

“His position is the second team, but at the same time, he trains with us and works with our principles.

“I am happy with the goal. He could have done a few actions a little bit better, but that is normal. It is experience.”

Guardiola has called for patience over Palmer’s development amid the hype surrounding his first-team emergence.

“People in this world want things immediately, and everything needs time,” Guardiola explained.

“You cannot cook a good dish if you don’t spend time in the kitchen. Take time.”