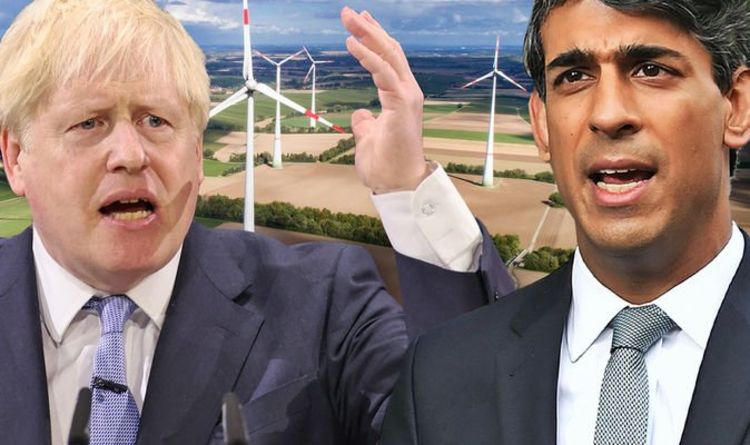 The Prime Minister unveiled his new plan on Tuesday, with a desire for Britain to turn green by 2050. The Treasury had warned the PM, saying the plan would mean taxes and consumer costs could rise to cover the price of the plan.

In a stark warning, Chancellor Rishi Sunak said the change to a green society would cause “material fiscal consequences” for the UK.

As the war of words rumbles on, the Government has been urged to consider the “wider long-run pressures to the public finances” which may make things even more economically difficult.

In a paper released by the Treasury, they said: “’There will be demands on public spending, but the biggest impact comes from the erosion of tax revenues from fossil fuel-related activity.

“Any temporary revenues from expanded carbon pricing are unlikely to be sufficient to offset the structural decline in tax revenues, but will be important in supporting the transition and can help manage any demands for public spending to support the transition.

“If there is to be additional public spending, the Government may need to consider changes to existing taxes and new sources of revenue throughout the transition in order to deliver net zero sustainably, and consistently with the government’s fiscal principles.”

The Treasury has also seemed to take a swipe at Mr Johnson’s spending as Prime Minister.

They said: “Seeking to pass the costs onto future taxpayers through borrowing would deviate from the polluter pays principle, would not be consistent with intergenerational fairness nor fiscal sustainability, and could blunt incentives.

“This could also push up the economic cost of the transition.”

Mr Johnson also wrote of the plans he has to ensure that the progression into a greener Britain is as seamless as possible.

He wrote: “For years, going green was inextricably bound up with a sense that we have to sacrifice the things we love.

“But this strategy shows how we can build back greener without so much as a hair shirt in sight.

“In 2050, we will still be driving cars, flying planes and heating our homes, but our cars will be electric gliding silently around our cities, our planes will be zero emission allowing us to fly guilt-free, and our homes will be heated by cheap reliable power drawn from the winds of the North Sea.”