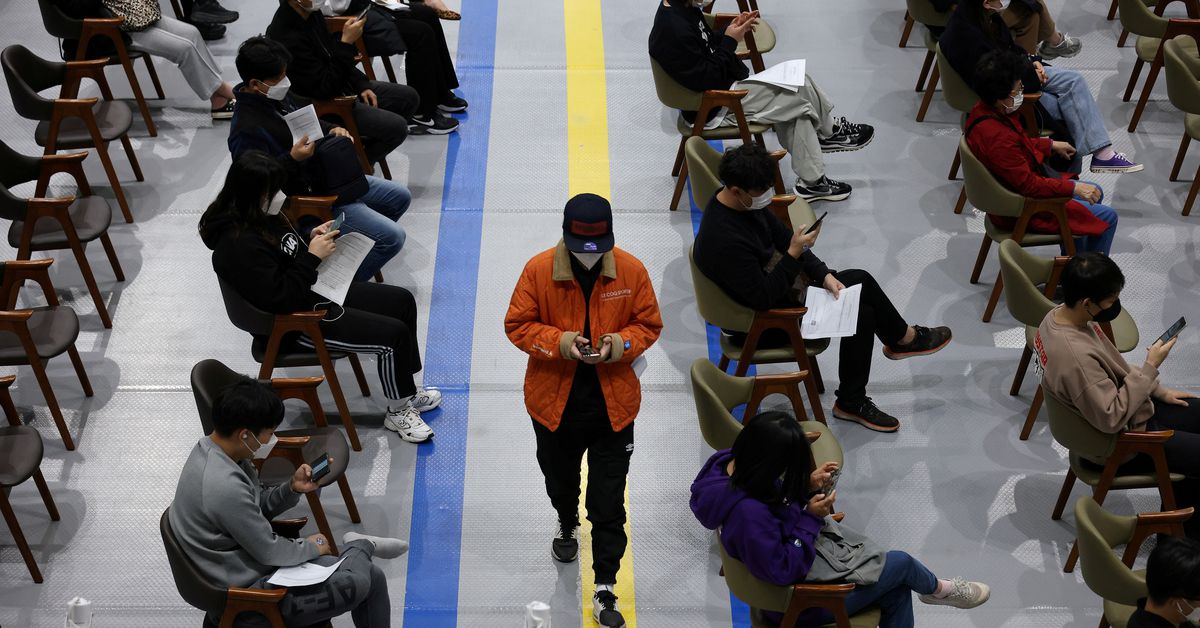 A man who got a dose of the Pfizer-BioNTech coronavirus disease (COVID-19) vaccine leaves a COVID-19 vaccination center in Seoul, South Korea, October 29, 2021. REUTERS/Kim Hong-Ji

SEOUL, Nov 3 (Reuters) – South Korea said on Wednesday it would ramp up COVID-19 testing at schools after a sharp rise of infections among children, weeks ahead of a plan to fully reopen schools nationwide.

The surge comes as new social distancing rules aimed at a phased return to normal came into effect on Monday as a part of the country’s plan to gradually move toward living with COVID-19 on the back of high vaccination rates.

South Korea has fully vaccinated nearly 90% of its adult population but only began inoculating children aged between 12 and 17 in recent weeks, administering just 0.6% of the age group with both doses so far.

“There is a growing concern as the frequency of new cluster outbreaks has been increasing, centred on educational facilities such as private tuition centres and schools,” Interior and Safety Minister Jeon Hae-cheol said.

The government would expand the use of portable polymerase chain reaction (PCR) diagnostic tests for COVID-19 in schools in Seoul and neighbouring regions, and mobilise more virus-prevention personnel in overcrowded schools, he said.

The country reported 2,667 new cases for Tuesday, an increase of more than 1,000 from the day earlier. Nearly one fourth of the new cases were found in teenagers, officials said.

“The teenagers spend a lot of time in communal living such as schools and tuition centres and they are also active in social activities,” Son Young-rae, a senior health ministry official, told a briefing.

“We believe that the risk of infection will inevitably rise and the confirmed cases will continue to surge stemming from these teenagers.”

South Korea has not seen a noticeable increase in seriously ill cases among teens, with just one out of 378 severe COVID-19 patients being treated in hospitals. South Korea has also reported a relatively low mortality rate of 0.78%.

Vaccination for the 12-17 age group began in October, using