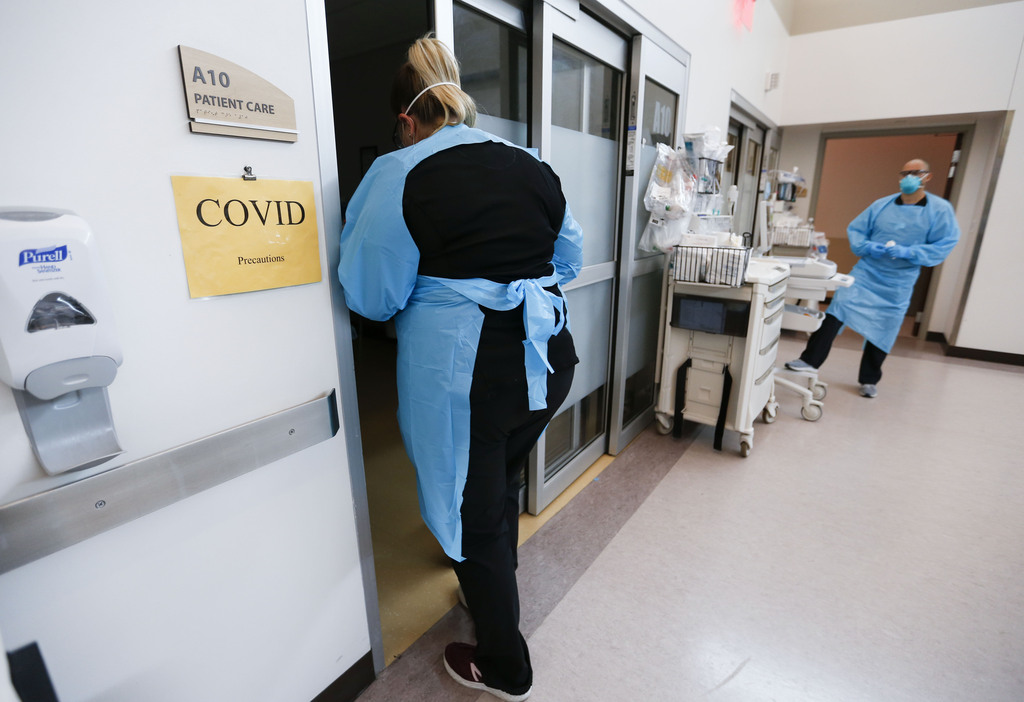 ST. LOUIS — Up until the first of the month, Adrian James was a typical toddler who loved to jump on the couch, pretend to cook meals for his baby brother and sing his ABCs. He was especially proud of being able to name all the planets in the solar system.

Now, Adrian needs high-flow oxygen through a tube in his nose, can’t eat on his own, won’t talk and struggles to sit up in his bed at SSM Health Cardinal Glennon Children’s Hospital after a serious bout with COVID-19.

On Thursday, his throat was so sore from having to be intubated — when a tube is inserted down the throat and into the windpipe so a ventilator can pump in air — that he drooled from not wanting to swallow. He just stared at a blueberry popsicle his mom gave him.

Adrian, who turns 3 next month, spent nearly five full days on the ventilator. At one point, doctors considered putting him on an ECMO (extracorporeal membrane oxygenation) machine, which pumps and oxygenates blood for the body. Because of how invasive it is, it is considered a last-ditch, lifesaving effort.

“He had to fight for his life, and it wasn’t up to me. I couldn’t do anything. The doctors were doing everything that they could,” said his mom, Tiffany Jackson, 21, of Mount Vernon, Illinois. “It’s going to be a very slow and steady recovery.”

More kids like Adrian are ending up in the hospital with COVID-19 as cases in children under the age of 18 have surged over the summer and into the start of school.

“Over the last month or so, with the delta variant and the loosening of protective guidelines, the going back to school, more group activities and sports and the inadequate vaccine rates have conspired to really impact kids,” Strand said.

Kids younger than 12 are not yet eligible to get vaccinated. Pfizer last week asked the Food and Drug Administration to authorize its COVID-19 vaccine with BioNTech for ages 5 to 11, which could take about a month.

“We are absolutely seeing more hospitalized pediatric patients than ever before with severe illness. We have kids who are in our ICU on ventilators. We have kids who have other chronic diseases who are COVID-positive and are really struggling … it’s just troubling that much of this disease is happening among kids who are not yet eligible for the vaccine.”

“And of the kids who are 12 and older coming to our hospital and being admitted,” she added, “they are across the board unvaccinated.”

When Adrian came down with a cough Tuesday of last week, Jackson never suspected he could have COVID-19. No one else in the house was sick.

She is a stay-at-home mom and had recovered from a mild case of COVID-19 in August, she said. She can’t get vaccinated because she has Guillain-Barre, a rare autoimmune disorder. Adrian’s father has had the first of the two-dose COVID vaccine.

A few days after Adrian started coughing, on Oct. 1, the toddler woke up hot and sweaty and not wanting to eat. Jackson gave him Tylenol and a bath. But after a nap, he woke struggling to breathe.

Jackson rushed him to nearby Good Samaritan Hospital, where doctors gave him first priority in a packed emergency room.

Staff immediately sent for a medical helicopter to take him to Cardinal Glennon, an hour-and-a-half away by car. A test revealed he had COVID-19.

“I was so scared. I was crying, but I was trying not to cry because I didn’t want him to see me crying, because he was really scared too,” Jackson said.

Adrian was screaming and not wanting anyone to touch him, she said. They had to sedate him to calm him.

Jackson rubbed his head. “Mommy is going to be right here. You are going to be OK,” she told him. When he fell asleep, she jumped in a car with Adrian’s grandmother to get to St. Louis as fast as they could.

Jackson joined her son in the emergency room soon after he arrived. An X-ray showed pneumonia in his left lung. It was inflamed and filled with fluid. He was breathing hard and fast, causing his stomach to bulge.

“The doctor came in and said we need to intubate him and put him on a ventilator because his lungs are working so hard, and they didn’t want his body to get too tired and stop breathing,” Jackson said.

After moving Adrian to an intensive care room, he managed to wake up and, despite her rushing to hold him down, pull the tube out in a split-second, Jackson said. A respiratory therapist had to redo it and further sedate him.

St. Louis-area hospitals on Aug. 2 began reporting the number of children hospitalized with COVID-19. It has ranged from 15 to 25 on any day, and peaked at 31 in late August. Thursday’s report showed 16 kids hospitalized. Six of those were in intensive care — three under the age of 12.

Strand said it’s not just kids with other chronic conditions who are ending up in the hospital with COVID-19, but otherwise healthy kids like Adrian.

“The delta variant is not predictable about who is going to get the sickest. That’s been true of COVID from the very beginning,” she said. “Just like in adults throughout the SSM system, we have adults in their 20s, 30s and 40s who were previously very healthy and are either extremely sick and requiring weeks or months of recovery, or don’t ever make it out of the hospital; and we are seeing that same expanse of severity in the pediatric population.”

More than 63,462 children have been admitted to hospitals since Aug. 1, the federal data shows.

Strand said hospitals already are seeing a surge in hospitalizations for illnesses other than COVID-19, which may be due to people having put off care for other conditions and increasing numbers of other infections.

“All of these together are conspiring to drain our resources at a time when there are nursing shortages all over the place,” she said. “I’m concerned about what the next weeks and months might hold.”

The night after Adrian was intubated, doctors were worried because he had not shown any signs of improvement. They told Jackson that the next hours were crucial, that if he didn’t start to turn around, they would have to consider trying the ECMO machine to give his lungs relief.

“I think I probably stayed up that whole night,” she said.

By morning, Adrian was doing better. He needed less oxygen, the pneumonia was clearing and his fever was going down.

Jackson has stayed in his hospital room the whole time, sleeping on a couch that converts to a bed. She’s only gone to the waiting room to pick up clean clothes and toiletries from Adrian’s grandmother, using the family room at the hospital to shower.

Jackson hasn’t seen her 6-month-old or Adrian’s father, who is home taking care of the baby and not wanting to risk infecting the infant.

She finally felt relief when Adrian’s breathing tube was removed Wednesday, she said. It was also heartbreaking as he tried to talk but couldn’t because his throat was so sore.

Late Thursday, he moved out of intensive care into a transitional unit. The next steps are to get him sitting in a chair by himself and eating and drinking on his own, she said. He still needs a feeding tube through his nose.

It’s going to be a long road to recovery, not just physically but mentally.

“It’s going to take him a while to get back to normal, even if we ever do get back to normal because he is so traumatized right now,” Jackson said. “He’s terrified of the nurses, of the doctors. If anybody walks in the room his body stiffens up, and he’s all tense. He gets real scared.”

She said she sees people joking about the seriousness of COVID-19 and not taking precautions in public as the pandemic stretches on. She wants people to consider how their actions can affect others.

“If everyone was thinking about the other people around them, then a lot more people would be vaccinated and there would be less kids getting sick,” she said. “It’s really affecting kids pretty bad right now, and I feel like probably with the holiday season coming, it’s just going to get worse and worse.”

What happened to her family is a reminder that people are still struggling in numbers not shown in a death toll.

More articles from the BDN