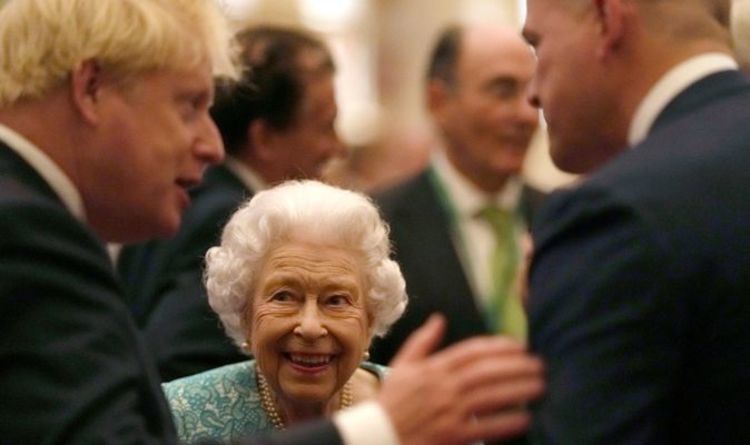 Guests at the St. George’s Hall reception included Bill Gates, US climate envoy John Kerry, and Boris Johnson. Users on Twitter responded acknowledging the significance of the three most senior royals appearing together to host the global power-houses.

One user tweeted: “That Windsor power, The Queen & The future Kings. [crown symbol].”

According to a statement from the palace, the Government Investment Summit aimed to “showcase the best of British innovation and highlight the U.K.’s role in green investment and clean technologies, to some of the most senior and influential business leaders from all over the world.”

The Queen was joined by the Prince of Wales and the Duke of Cambridge at the reception and met some of the leading figures in the castle’s green drawing-room before the Royals mingled more widely, according to the Daily Mail’s Royal Editor, Rebecca English.

Prime Minister Boris Johnson was due to be introduced first, but he appeared after the Queen began welcoming her guests and took his place at the end of the line.

The Duke and Duchess of Gloucester and Prince Michael of Kent were also present at the event.

The GIS reception comes ahead of the Queen, and other members of the royal family’s attendance at events in Glasgow for the COP26 United Nations Climate Change Conference in November.

In a foreword for the Global Investment Summit’s official brochure, the Queen said she was “proud” of how the UK is moving towards a sustainable future but said “there is still much more to do”, urging nations to “rise to the challenge”.

In her foreword, she also highlighted the challenges posed by the COVID-19 pandemic, saying that it “has often threatened what we have all previously taken for granted: the opportunity to be, work, and grow together.”

She added: “Yet, in the face of these challenges, I have been inspired by countless stories of overcoming these hurdles. We have learned to connect with each other through innovative technologies and … achieved scientific breakthroughs faster than was ever expected.

“The challenge of today, however, is not in breaking a code. It is in working together across the globe to avert the challenges of climate change. It is our shared responsibility, of those in government, business, and civil society, to rise to this challenge.”

“I am proud of how the United Kingdom is seeking to secure a sustainable future, yet there is still much more to do.

“This summit is not just a showcase, but an opportunity to come together and, in the generous spirit of collaboration, forge new partnerships.”

This comes after Prince William hosted the inaugural Earthshot Prize Award Ceremony at the weekend, an ambitious environmental program aimed at finding new ideas and technologies around the world to tackle the climate crisis.

The £50million initiative aims to fund and promote innovative ways to repair the planet by awarding five, £1million prizes each year for the next ten years.

Prince William told BBC Newscast that he hoped the prize would “stimulate solutions and action that a lot of people haven’t necessarily produced yet.”

“I’m hoping, you know, the prize will galvanise a lot of people in positions of responsibility to, you know, go further, bigger and actually start to deliver,” he added.