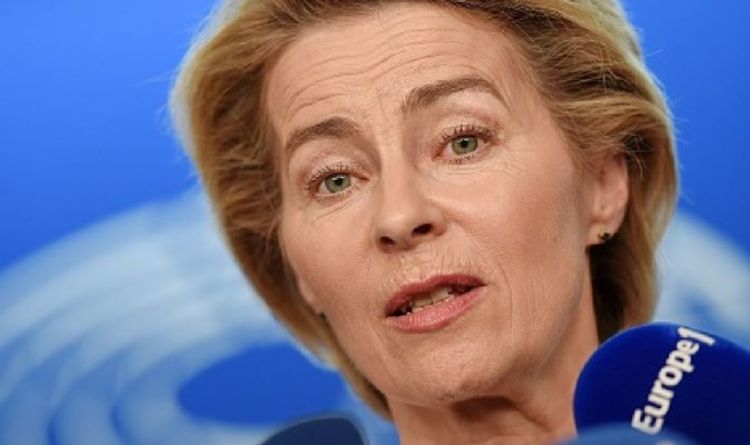 EU Parliament chief David Sassoli said on Wednesday that he had launched legal action against the Commission over its “failure” to act on the rule of law in the ongoing row with Poland and other EU states.

President Sassoli said the Commission should have made use of the conditionality mechanism against Warsaw aimed at suspending payments to countries that breach the rule of law.

He said: “EU Member States that violate the rule of law should not receive EU funds.

“Last year, Parliament fought hard for a mechanism to ensure this.

“However, so far the European Commission has been reluctant to use it.”

The legal action will be triggered on November 2 and will be then considered by the European Court of Justice, unless the Commission acts before that date.

EU leaders will tackle their Polish counterpart today over a court ruling that questioned the primacy of European laws in a sharp escalation of battles that risk precipitating a new crisis for the bloc.

The French president and the Dutch premier are particularly keen to prevent their governments’ cash contributions to the EU from benefitting socially conservative politicians undercutting human rights fixed in the laws of western liberal democracies.

Polish Prime Minister Mateusz Morawiecki is set to defend the October 7 ruling by Poland’s Constitutional Tribunal stating that elements of EU law were incompatible with the country’s constitution.

“It’s a major problem and a challenge for the European project,” a French official said of the Polish ruling.

Morawiecki has already come under fire from EU lawmakers this week and the head of the Commission said the challenge to the unity of the European legal order would not go unanswered.

This, as well as other policies introduced by his ruling Law and Justice (PiS) party are set to cost Poland money. With the ruling, the PiS raised the stakes in years of increasingly bitter feuds with the EU over democratic principles from the freedom of courts and media to the rights of women, migrants and LGBT people.

A senior EU diplomat said such policies were “not tenable in the European Union.”

The Commission has for now barred Warsaw from tapping into 57 billion euros of emergency funds to help its economy emerge from the COVID pandemic.

Warsaw also risks losing other EU handouts, as well as penalties from the bloc’s top court.

Sweden, Finland and Luxembourg are also among those determined to bring Warsaw into line and have stepped up their criticism since PiS came to power in 2015.

The immediate consequences to Poland – with some 38 million people, the biggest ex-communist EU country – are financial.

But for the EU, the latest twist in feuds with the eurosceptic PiS also comes at a sensitive time as it grapples with the fallout from Brexit.

The bloc – without Britain – last year achieved a major leap in integration in agreeing to joint debt guarantees to raise 750 billion euros for COVID economic recovery, overcoming stiff resistance from wealthy states like the Netherlands.

While most EU states share a currency, more fiscal coordination can only hold if the rich ones donating more than they recuperate from the bloc are sure their taxes do not end up financing politicians flouting their core liberal values.

Morawiecki has dismissed the idea of leaving the EU in a “Polexit”. Support for membership remains very high in Poland, which has benefitted enormously from funding coming from the bloc it joined in 2004.