Australian opener Beth Mooney scored her maiden century for the Scorchers, and second in the WBBL, to help the team post a record-breaking 2-194 from their 20 overs.

Mooney rode her luck against an out-of-sorts Renegades attack to reach triple figures with the second last ball of the innings, finishing unbeaten on 101 off 63 deliveries to take her tally to a tournament-high 272.

The elegant left-hander combined with captain Sophie Devine (72 off 49) for a stunning 165-run opening stand in 98 balls, the third-highest in WBBL history, on the way to their highest-ever total.

In response, the visitors were restricted to 6-150 with 20-year-old off-spinner Lilly Mills, one of the recruits of the tournament after crossing from Brisbane Heat, doing the damage on her way to career-best figures of 4-25 off three overs.

The win saw the Scorchers jump from fifth into the top four at the midway point of the season.

The Renegades looked far from a team with one loss in their first seven matches, with dropped catches, fumbled run out opportunities and misfields marring their fielding performance.

Mooney was the beneficiary of all three, getting a trio of lives on 6, 29 and 58.

First was a run out chance at the non-strikers end by Ella Hayward and the second a simple dropped catch by Ellie Falconer at third.

The third summed up the Renegades’ day to a tee with Carly Leeson taking a brilliant running catch off a front-foot no-ball from seamer Holly Ferling. 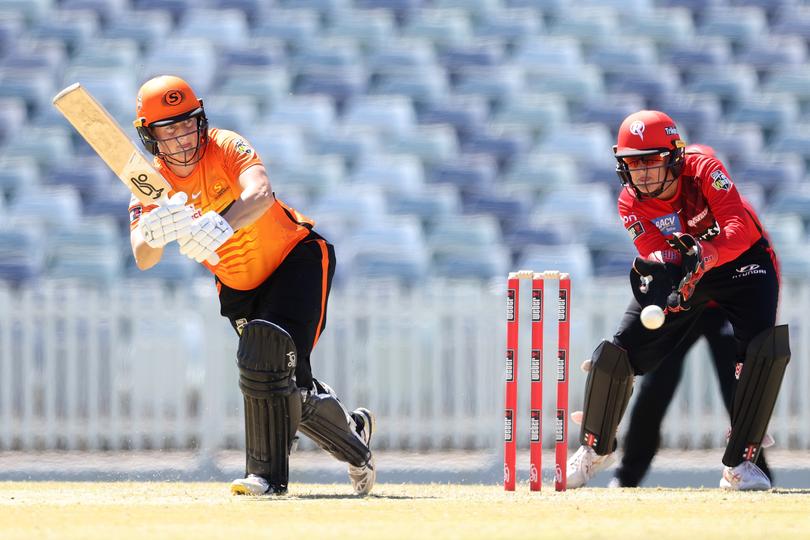 From the moment Devine won the toss, not a great deal went wrong for the home side in their first match at the iconic East Perth venue in nearly two years.

The Scorchers reached their best power-play score of the season with two overs left to finish with 0-63 before the fielding restrictions were eased, all without a risky shot.

Mooney made the most of the lightning-fast outfield by picking the gaps and playing the full 360 degrees during her 13-boundary innings.

Devine, who belted the only two sixes of the innings including one into the east bank construction site to go with eight fours, fell to medium-pacer Courtney Webb with 24 balls left in the innings.

Webb not only took one of just two wickets for the Renegades, she also provided a counter attack batting at three with an entertaining 34-ball 46 before becoming Mills’ fourth victim.

The Scorchers have two more home games to come, both against Hobart on Saturday and Sunday at the WACA, before finishing the regular season with a five-game stint in Adelaide.