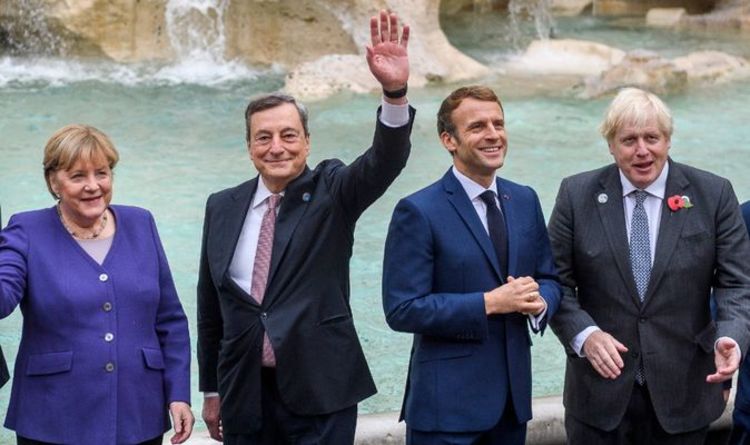 At the G20 summit in Rome, climate change, global taxation and coronavirus vaccines were all on the table as the leaders of the UK, USA, France and other major players sat down to establish commitments to work together in the face of pending climate catastrophe. However, activists have been angered by the lack of tough deadlines given by the world’s most powerful economies.

As negotiations are set to start in Glasgow for COP26, G20 leaders have committed to the Paris Agreement of limiting global warming to 1.5C above pre-industrial levels.

In a statement, the G20 said: “Keeping 1.5C within reach will require meaningful and effective actions and commitment by all countries, taking into account different approaches.”

They also pledged to strive for the target of net-zero carbon emissions “by or around mid-century” – something many are wary of as they didn’t set the firm date for 2050, which is touted as being the latest date possible.

As part of plans to build a “stable and fairer” tax system, leaders approved an agreement that will make all multinationals pay a minimum of 15 percent tax.

Internet behemoths such as Amazon, Google parent Alphabet, Facebook and Apple – which have benefited from basing themselves in low-tax countries to minimise how much they are required to give back to the state – are particular targets of the new worldwide regulations.

Each country needs to pass national legislation first – something that has huge opposition in the US, where many of the giants are based.

Leaders voted in favour of WHO’s plan to vaccinate 40 percent of the world’s population against coronavirus by the end of 2021, and 70 percent by the middle of 2022.

Leaders agreed to remove supply and financing constraints to developing countries to improve access to the COVID-19 vaccine.

They also promised to “work together towards the recognition of COVID-19 vaccines deemed safe and efficacious by the WHO,” after a complaint from Russian president Vladimir Putin about lack of international support for the country’s Sputnik V jab.

Spiking energy prices has pushed inflation to highs that are putting strain on the world’s economy, pushing prices up for the everyday consumer.

G20 leaders said they would “remain vigilant to the global challenges that impacting on our economies, such as disruptions in supply chains, (and) monitor and address these issues as our economies recover.”

The G20 pledged: “We will continue to sustain the recovery, avoiding any premature withdrawal of support measures, while preserving financial stability and long-term fiscal sustainability and safeguarding against downside risks and negative spillovers.”