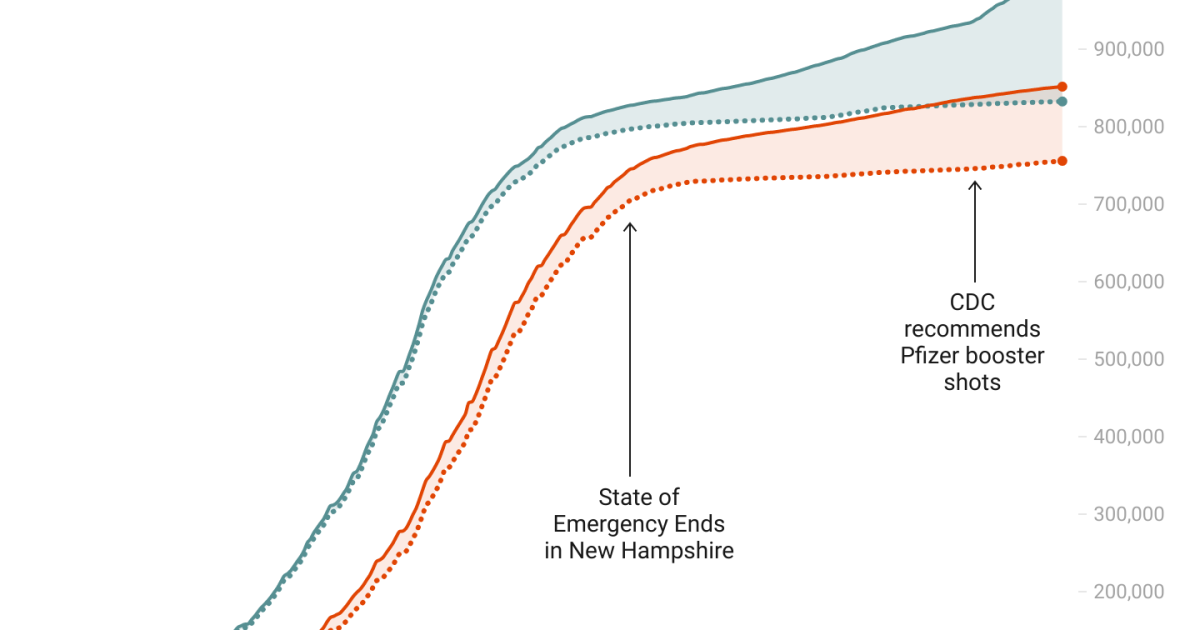 Get NHPR’s reporting about politics, the pandemic, and other top stories in your inbox — sign up for our newsletter today.

In a new interview with Health and Human Services Commissioner Lori Shibinette, NHPR confirmed the state of New Hampshire has been relying on Centers for Disease Control and Prevention data because the state’s own records are missing thousands of doses. The state’s data correction process could take months, Shibinette said.

But the commissioner also thinks the CDC’s data is becoming increasingly inaccurate. She thinks many booster doses are likely being tracked incorrectly as first shots, which could cause artificial inflation of the state’s first shot administration rate.

A separate system crash at the end of October meant the state was also unable to report how many new cases of the virus were cropping up during that time, or accurately map rates of community transmission.

Over the summer and early fall, the gap between CDC and state counts of COVID-19 vaccine doses administered grew to almost 200,000 first doses.

As of Oct. 21, the most recent data NHPR had on file from before the state disclosed its vaccine errors, state data showed 832,500 Granite Staters had received at least one dose of the vaccine, while the CDC put the same measurement at over 1,000,000. Translated into percentages, the state was reporting around 60 percent of Granite Staters with at least one shot, compared to the CDC’s 74 percent.

The widening gap in vaccine data between the two entities is partially due to the conclusion of the state of emergency in New Hampshire on June 11 and the earlier introduction of a new, underfunded vaccine registry system, the New Hampshire Immunization Information System, (NHIIS).

The end of the state of emergency

Commissioner Shibinette said the state could no longer collect COVID-19 vaccine data for individuals who had not been presented with the ability to opt-out of having that information collected by the state of New Hampshire, as required by state law.

Health providers who didn’t offer an opt-out option were excluded from the data migration to NHIIS to stay in compliance with the law.

Pharmacies, which are federal providers of vaccines, don’t need to provide an opt-out option when reporting data to the federal government, which means the state can no longer import that pharmacy data into NHIIS.

Missing pharmacy data is especially consequential because pharmacies like CVS, Rite Aid and Walgreens are some of the largest COVID-19 vaccine providers in the state.

NHPR reported on the growing gap between state and federal vaccine data during the summer. At the time, the state did not respond to multiple requests for comment about what was driving the disparity.

While state officials have long said the CDC’s data is expected to be slightly higher than their own, given the CDC’s ability to track some doses the state does not have access to, the rates should be fairly similar, which by mid-summer was no longer the case. But it was not until Oct. 27 when officials clarified they lost the ability to track pharmacy data.

When asked why officials did not publicly share that their own data was growing increasingly inaccurate until late October, over four months after the state of emergency ended, Commissioner Shibinette said “we had to dive down and figure out where the gap was growing.”

In response to the same question, a spokesperson for Gov. Chris Sununu said “NH data and CDC data was investigated in August and September to understand the source.”

But the discrepancy had been present since June. In the statement given to NHPR, Sununu’s office didn’t address the delay in the statement.

Nor did state officials clearly flag that the COVID vaccine data it released may have been unreliable. Even NHPR’s reporting from this time was based on this data, which we now know to be incomplete.

And until that gap is fixed the state has to rely on the CDC for some data. But CDC data, Commissioner Shibinette says, “isn’t perfect.”

“We don’t believe that the booster data that CDC is reporting is reflective of all the people that have gotten boosters in our state,” says Shibinette.

New Hampshire was the last state in the country to implement a statewide, centralized immunization registry. That means working with pharmacies on efforts like an opt-out option or with the CDC on large-scale vaccine tracking are still new, and issues are emerging in real time.

Commissioner Shibinette says it would have been better for the database to have been done before the onset of a pandemic.

“Now we’re working [the database] out in the middle of the pandemic when everybody is watching all of our numbers,” she says.

Commissioner Shibinette says the state sent the CDC de-identified data, that is data without individuals’ names, to protect the privacy of Granite Staters.

But the vague data could be making it more difficult for the CDC to know if some people getting a booster are already vaccinated, or if it’s their first shot.

Since late September, when the CDC approved Pfizer boosters, New Hampshire’s first dose count has skyrocketed to rates the state hadn’t seen since the spring. But some health care providers across the state have continued to lament low rates of first dose uptake.

Just 1.6 percent of fully-vaccinated Granite Staters have received a booster dose, according to the CDC’s map. That rate makes New Hampshire the worst state in the country for booster administration.

The combination of high rates of first dose uptake contrasting with what providers across the state are seeing and a strikingly low booster rate suggests thousands of booster shots in New Hampshire may be getting tracked by the CDC as first doses.

The CDC did not respond to a request for comment by the time of publication.

Breakthrough case data is also difficult to track in circumstances where the individual was vaccinated after the state of emergency ended, because of the state’s reliance on the CDC’s data.

Inaccurate information isn’t the only penalty New Hampshire is experiencing due to a lack of an immunization registry. Earlier this year, the state relied on a glitchy, federal system to schedule appointments for older residents.

Many health providers in the state say NHIIS is time-consuming and complicated. They have to manually enter their own data collection into the system. For some smaller doctor’s offices, the paperwork burden is part of the reason they aren’t offering COVID-19 vaccines in their practices.

Funding to rectify vaccine data issues and support providers transitioning to using NHIIS was at the heart of the $27 million in federal funding rejected by the Executive Council last month.

The larger of the two contracts, for $22.5 million, was largely focused on improving NHIIS and had a section on creating a link between the registry and other systems. Jim Potter, with the New Hampshire Medical Society, called that funding crucial for New Hampshire health providers trying to use the new system.

With the funding rejected by the Executive Council, Shibinette said she’s looking at alternative sources, like American Rescue Plan dollars, a strategy that did prove effective last week.

“When the money got rejected, it became very, very obvious that there was no quick resolution,” she said.

Editors Note: This article was corrected to reflect that on Oct. 21, the CDC said 1,000,000 Granite Staters had received at least one dose of the COVID vaccine. We previously said 100,000 for the same figure. We regret the error.