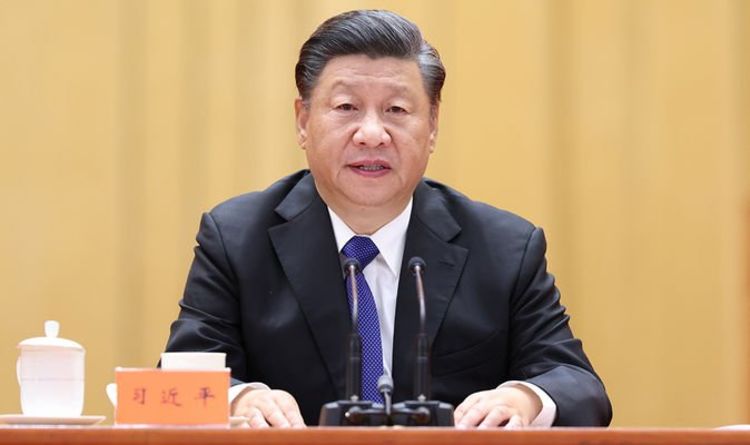 Mr Xi warned “reunification” with Taiwan “must be fulfilled”, adding that the Chinese people had a “glorious tradition” of opposing separatism.

Taiwan, which considers itself a sovereign state, responded by saying its future lay in the hands of its people.

It has vowed to defend itself against Chinese aggression.

China, which sees the island as a breakaway province, has flown a record number of military jets into Taiwanese air space recently.

There have been more than 150 incursions since the start of this month.

Analysts say these flights can be seen as a warning to Taiwan’s democratically elected president Tsai Ing-wen, ahead of the island’s national day today.

Taiwan’s defence minister said that tensions with China are at their worst in 40 years.

But Mr Xi‘s remarks, in a speech at Beijing’s Great Hall of the People, were more conciliatory than his last intervention on Taiwan in July, where he vowed to “smash” any attempts at formal Taiwanese independence. Fears over China’s rhetoric led to a rare face-to-face meeting between US national security adviser Jake Sullivan and China’s top diplomat Yang Jiechi last week.

And US President Joe Biden, who is struggling to balance his need to keep China onside with climate change targets and his defence of a sovereign nation, has agreed to speak to Mr Xi in a bilateral Zoom call by the end of the year. The threat of military conflict has increased the focus of the island’s allies, with the US secretly trainingTaiwanese troops.

The CIA also announced a new China mission centre which, CIA director William Burns said, “will further strengthen our collective work on the most important geopolitical threat we face in the 21st century – an increasingly adversarial Chinese government”.

Last month, Britain announced a new defence pact with Australia and the US, with Canberra securing eight nuclear-powered submarines to safeguard its waters.

The UK has also permanently deployed two warships, Severn and Tamar, to the Far East, using Singapore as their base.

Last night it emerged that Britain is also preparing to send one of its nuclear-powered Astute submarines to the region for an “extended period of time”.

Based in Guam, it will bolster the presence of three US Navy subs and surveillance planes.

It will also carry out joint exercises as part of a Pacific force of allied nations which will monitor China’s intentions.

China expert Matthew Henderson, of the Council on Geostrategy, said: “The impending bilateral between Biden and Xi shows how serious the problem is. You cannot rule out the possibility that such a complex interplay of interests could develop into a catastrophic momentum of its own.”

Why we must support this tiny island nation

In an increasingly polarised world we must brace ourselves for the real possibility of military conflict with China within the decade.

Unless there is a change in Xi Jinping’s ardently nationalistic posture, our very identity as believers of the international rules-based order is at stake.

China has already tested the limit of the west’s endurance as it broadens its territorial claims over vast swathes of vital maritime trade routes.

And, just as in 1939 when Britain stood alone against an oppressor, it is the fate of a single sovereign nation that may, finally, tip the balance. For

Xi to proclaim his desire to “reunify” Taiwan peacefully reminds me of that famous song in Mel Brooks’ To Be Or NotTo Be, when Hitler proclaims: “All I want is peace – a little piece of Poland, a little piece of France.”

Logically, there is every reason for China to avoid military conquest of the island, just 112 miles from its shores.

Killing the children you wish to return to the bosom of the motherland is not a good look.

More importantly, a conventional invasion will be hard-fought, even if it catches the US unawares, and will destroy much ofTaiwan’s infrastructure.This is significant because Taiwan currently produces more and betterquality semiconductors – the chips that power all computers – than even South Korea.

But, with Xi already 68 and impatient to have reunification as his legacy, we must prepare for the possibility that logic will not rule the day.

Just as when Deng Xiaoping told Margaret Thatcher during Hong Kong handover talks in 1984 that he would be willing to accept a pile of smoking rubble, we cannot underestimate China’s political desire to possess Taiwan, whatever its state.

Marco Giannangeli is the Diplomatic Editor